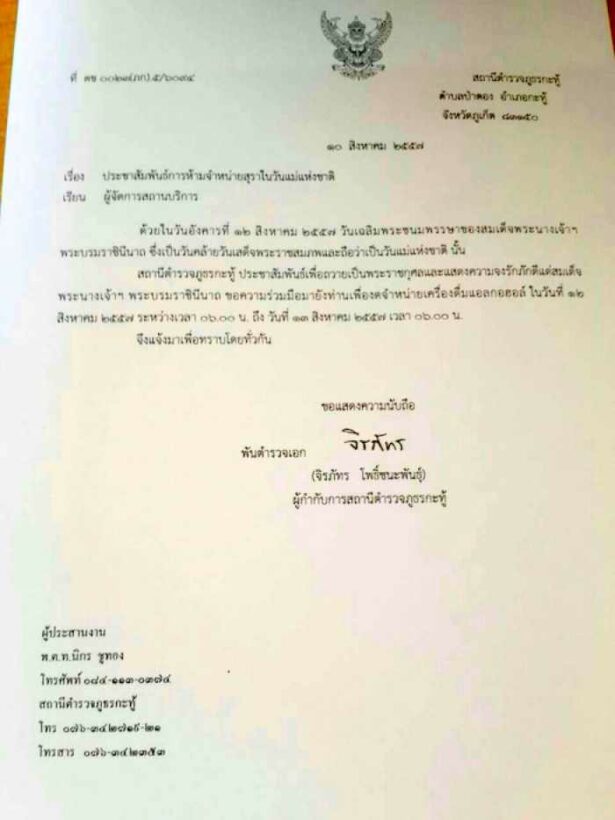 PHUKET: Patong Police Superintendent Chiraphat Pochanaphan has denied reports that his officers yesterday ordered bar owners in Patong to shut down – or face a fine of 75,000 baht.

“None of my officers ordered bars to close yesterday, and they did not threaten bar owners with a fine of up to 75,000 baht if they did not close,” Col Chiraphat insisted to the Phuket Gazette today.

“The sale and purchase of alcohol was not banned by law yesterday, and the only officers on the streets were regular patrols.”

Allegations filed directly with the Gazette that police ordered the shutdown followed Phuket Provincial Police Commander Peerayuth Karajedee clarifying on Monday that there was to be no ban on the sale of alcohol in Phuket, as island residents joined the nation in celebrating HM Queen Sirikit’s birthday and Mother’s Day yesterday (story here).

Col Chiraphat also confirmed that his officers would have had no legal support to enforce a bar closure last night.

By law, the sale and purchase of alcohol is prohibited only on election days and four Buddhist holidays (click here).

The ban may be introduced on other days, according to the Alcohol Control Act BE 2551, but only by the order of the Alcohol Beverage Control Committee, chaired by the Public Health Minister.

“Perhaps it was a ‘misunderstanding’. We asked bar owners to close in respect of Her Majesty’s Birthday, and we heard that many did, so that venue owners and their staff could spend time with their families,” he said.

The Gazette was sent a photo of the formal request that was presented to bar owners “asking” the venue operators to close from 6am yesterday to 6am today.

Although the request was printed on official government letterhead and signed by Col Chiraphat, he still insisted that it was not an order to close.

“But I have no idea where the figure of 75,000 baht would come from. Who would earn that much money in one night?” Col Chiraphat said.