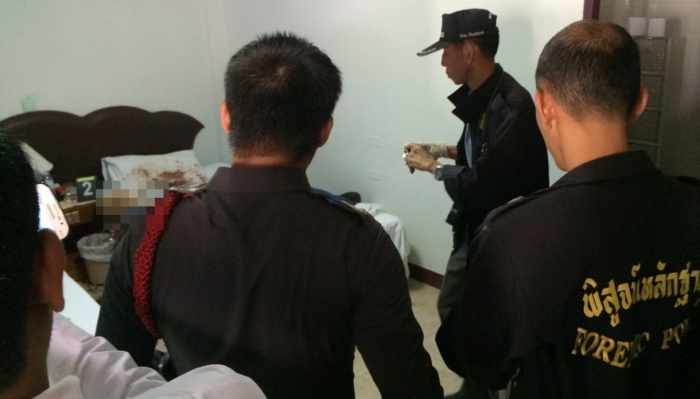 PHUKET: Patong Police have not ruled out suicide or murder after the bloody body of a Russian tourist was found stabbed and slashed in his hotel bedroom on Nanai Road this morning.

The tourist*, a 33-year-old from the Sakha Republic, arrived in Phuket on July 19 with a tour group and was scheduled to return to Russia this morning. Hotel and tour agency staffers called police after they were unable to contact him.

“For about an hour staffers called him and knocked on his door, but there was no response,” said Maj Peerasak Boonsang of the Patong Police.

“When we entered the room, we found him dead on the bed with a long, deep cut running from his wrist up his forearm, as well as seven stab wounds to his chest.”

At the scene, police also found a bloody knife, as well as three pages of handwritten notes in Russian, which were discarded in a bin in the bathroom.

Staff explained to police that the Russian man, last seen at breakfast on Monday, had been seen with a ladyboy at the hotel on several occasions.

“His room had a ‘Do not disturb’ sign hanging from his door knob since yesterday,” Maj Peerasak told the Phuket Gazette.

“We are now searching for the ladyboy, checking CCTV, translating the letters and continuing to question hotel staff.”

Police have not ruled out murder or suicide, Maj Peerasak confirmed.

* The Gazette is withholding the name of the deceased until it is confirmed that relatives or next of kin have been informed.