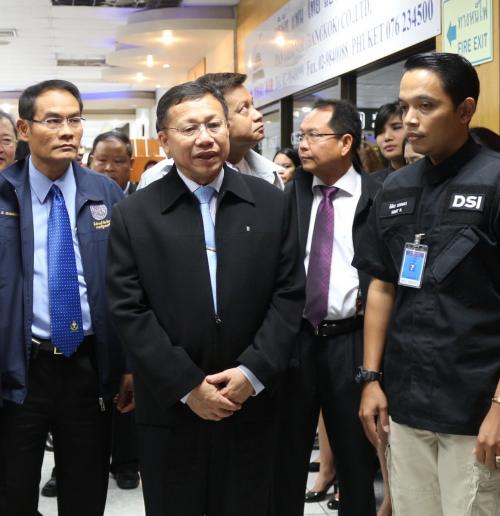 PHUKET: Long-serving Mayor of Patong Pian Keesin, as well as ten other people and suspect locations, has been named on a Department of Special Investigations (DSI) blacklist regarding illegal taxis.

The blacklist was presented yesterday as Tourism and Sports Minister Somsak Pureesrisak and DSI Director-general Tarit Pengdith arrived on the island to open the ‘Phuket Organized Crime Center’ (story here).

After delivering the list of names and locations to the media, Mr Tarit gave notice that 30 days from today at least one person would be apprehended and punished for his part in the illegal taxi operations that are ruining Phuket’s reputation in the world.

“We’re not really going for taxi drivers who are trying to earn enough to make a living. We’re going for the big fish,” Mr Tarit warned.

The list presented by Mr Tarit consists of the following persons, places and institutions:

8) the taxi station in front of Jungceylon shopping center, Patong

9) the taxi station in front of the Avista Phuket Resort and Spa, Kata Beach

11) the taxi station at Baan Bang Duk in Sakoo.

“These persons, places and institutions will be investigated, as we have information linking them to the illegal taxi business directly, or at least influencing the black-plate taxi scene in Phuket,” Mr Tarit said.

The DSI intends to reveal more information, including the names of other local politicians who are getting a piece of the black-plate taxi action, Mr Tarit said.

The Phuket organized crime center will involve cooperation between four bodies: the Ministry of Tourism and Sports, the DSI, the Phuket provincial government and local police.

“Today was not the grand opening of the center,” Mr Tarit explained, though the center is now operational and will be running at all hours of the day. “Though the dates have not been set yet, the official opening will be chaired by Prime Minister Yingluck Shinawatra.”

A 24-hour hotline for the center has yet to be announced. However, Mr Tarit explained that anyone was welcome to come to either the office in Phuket Town or the office at Phuket International Airport to report a crime. Complaints can also be filed be email at the DSI’s website here.