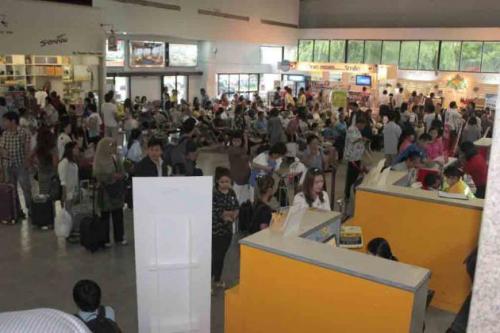 She said both Blair and Annan had unofficially accepted the government’s invitation to take part in a panel discussion to be hosted by the Foreign Ministry.

The ministry, assigned by the government, is approaching foreign leaders, particularly those with experience in dealing with conflicts between compatriots, to help contribute to Thailand’s efforts towards national reconciliation, the PM said.

“The government wants to embrace international viewpoints and measures that have been successfully implemented in foreign countries. We want these to benefit Thailand, too. Foreign leaders are invited to speak to Thai people,” she added.

The foreign leaders will take part in a panel discussion titled “Uniting for the Future: Learning from Each Other’s Experiences”, to be held by the Foreign Ministry on September 2, said Foreign Minister Surapong Tovichakchaikul.

In addition to Blair and Annan, Finland’s former president Martti Ahtisaari has been invited to join the discussion and share his international-reconciliation experience, Surapong said.

Both Annan and Ahtisaari are Nobel Peace Prize laureates.

In an interview with the Thai media last year, Annan was asked to comment on the role of former prime minister Thaksin Shinawatra in reconciliation. He said it was up to the country’s political leaders to find a way to bridge gaps.

“They have to put the country first. The country is bigger than they are,” he added.

Thaksin’s legal adviser Noppadon Pattama said yesterday that it depended on the government whether to invite Thaksin to join the proposed political reform forum.

He said that regardless of whether Thaksin was invited, there were already people with the same views as his in the forum.

Priscilla Hayner, an expert on truth commissions and transitional justice who has focused her work on official truth-seeking measures in political transitions around the world, has also been invited to join the discussion, said Deputy Prime Minister Phongthep Thepkanjana.

He said the political reform forum, proposed recently by the prime minister, could begin next week with about 100 participants.

“The number of participants should be more than 50, but not over 100. Too few people, and the viewpoints gathered would lack diversity. Too many people, and you don’t have [enough time for] everyone speaking,” he said.

Phongthep said he understood that some of the senior figures invited might, however, be unable to join the forum, because of their current status.

In a related development, former Democrat Party leader Bhichai Rattakul yesterday accepted a government invitation for him to join the political reform forum. Phongthep had called on Bhichai at his house to extend the invitation.

Bhichai said the reform effort should not be aimed at benefiting anyone or any political party in particular, nor should anyone set conditions for joining the forum.

“Bhum Jai Thai would be delighted to see peace in the country. Personally, I will do anything to help with the reconciliation efforts,” he said.


People’s Army continues rally despite lifting of ISA
The Nation / Phuket Gazette
PHUKET: An anti-government group continued rallying at Lumpini Park yesterday despite the fact that the government has lifted the Internal Security Act imposed in three Bangkok districts.

National Police chief General Adul Saengsingkaew yesterday thanked the 3,700 police officers deployed when the ISA was imposed on August 1, saying they had done a good job in enforcing the law and preventing protesters from entering the restricted areas.

Deputy Prime Minister Pracha Promnog said the anti-government People’s Army to Overthrow the Thaksin Regime can continue rallying at Lumpini Park as it is within their rights and should clashes break out, the Metropolitan and Special Branch police can handle the situation.

However, he said, security officers have been tasked with closely watching the group’s movements.

Pracha went on to say that though this group will possibly head to Government House or Parliament, there should be no problems provided the traffic or other people’s rights do not get affected.

As to whether the ISA would be imposed again, Pracha said that was entirely up to the Internal Security Operations Command.

Admiral Chai Suwannaphap, leader of the People’s Army to Overthrow the Thaksin Regime, said that though more supporters were joining the rally, many of them were doubtful if this movement can be taken seriously. He went on to say that the lifting of the ISA does not affect his group as they were not planning to move to the areas in question. As for whether a red-shirt community radio group would rally near the Parliament compound, he said his group had nothing to do with that.

Somchai Chatsakunpen, deputy director of the Bangkok Metropolitan Administration’s Environmental Office, said he had asked the protesters to remain outside the park as residents complained they could not do their exercises conveniently. However, he added, he had yet to speak to the protest leaders again.

Foreign Minister Surapong Tovichakchaikul said he had told his ministry officials to inform foreign missions in Bangkok that the ISA has been lifted, adding that he was meeting with ambassadors and diplomats on Tuesday to give them a translated version of the amnesty bill.


Foreign investors concerned political tension will boil over
The Nation / Phuket Gazette
PHUKET: The Pheu Thai-led government pushed the controversial amnesty bill through its first reading in the House of Representatives on Thursday, raising the spectre of a renewed political confrontation between government supporters and their opponents inside Parliament and possibly on the streets.

Nandor von der Luehe, chairman of the Joint Foreign Chambers of Commerce in Thailand, said: “Political tension is always negative [for business and industry]. We had the Internal Security Act in the South [as well as in three districts of Bangkok from August 1-10]. All these are negative news going out from Thailand.

“Travel advisories from embassies are out. When you go to the American Embassy’s website, there is a warning on Thailand that again we have political tension and that American citizens should be careful [while in Thailand].

“If something [worse] happens, i