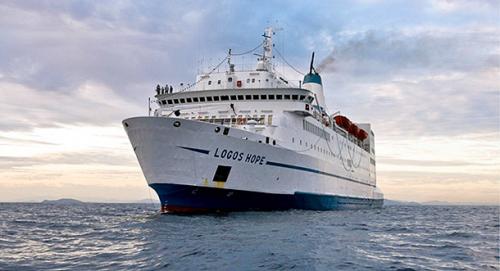 PHUKET: MV Logos Hope, carrying the world’s largest floating library, arrives in Phuket on Wednesday and has already announced two special events to be put on by some of its 460 volunteers.

The first of the two events will be the ‘Cultural Cafe’, which showcases a variety of cultures, music and dances from around the globe.

The event, during which guests will have the chance to chat with Logos Hope‘s international crew members of more than 50 different nationalities, will be held on August 16, from 7pm to 9pm.

Tickets, available on board, will cost 100 baht per person.

The second event announced will take place on August 18, when Logos Hope crew members will present A Radical Step from 6pm to 8pm.

“If you’ve ever wondered why Logos Hope crew members leave behind their families, security and jobs to volunteer on board for two years, then come along to A Radical Step. Listen to their personal life-changing stories, note their fellowship, and discuss some deeper questions about life and what is really important,” says the press release.

The ship, to be moored at the Deep Sea Port in Ao Makham, will be open to the public from 10am to 9:30pm, Thursday through Saturday, and from 1pm to 9:30pm on Sunday, August 18 (click here for map).

Tickets to board the vessel will cost 20 baht. Children under 12 may board free of charge, but must be accompanied by an adult.

“The Logos Hope offers an expanded selection of over 5,000 books at affordable prices. They cover a range of subjects including science, sports, hobbies and family life. With children’s titles, academic texts, dictionaries, atlases and more, the book fair is something the whole family can enjoy,” the press release continues.

Guests on board will also be allowed to explore the Visitor Experience deck, from the Welcome Area, which introduces the new vessel through a short movie and interactive displays, and the International Cafe, which has ice cream, drinks and snacks for sale.

The MV Logos Hope is operated by GBA Ships e.V., an international charitable organization registered in Germany. Since 1970 the organization has welcomed over 42 million visitors up the gangways of the ship, in more than 150 countries and territories around the world.