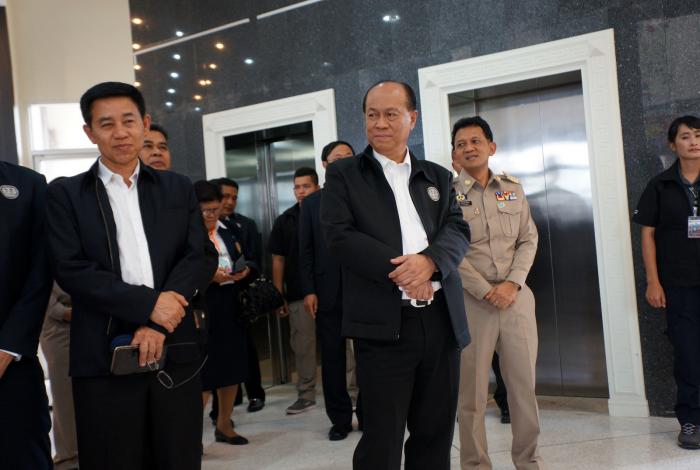 PHUKET: A minister of the Interior sank provincial officials’ hopes for the potential resolution of one of Phuket’s longest-running conflicts, during a ‘state visit’ by Prime Minister Prayuth Chan-o-Cha to the island on Friday.

Decades-long disputes between the Rawai sea gypsies and developers in the island’s southernmost municipality had entered a new round of government-mediated negotiations in February when Governor Chamroen Tipayapongtada backed a plan to buy from the developers the land that the gypsies currently reside on (story here).

Even after more than a hundred sea gypsies marched to Rajabhat University to hand PM Prayuth a letter of grievances on Friday (story here), Interior Minister Anupong Paochinda told the Phuket Gazette that Gov Chamroen’s plan would not move forward.

“The government cannot buy a piece of land for private purposes just because the Phuket Provincial Governor asks us to do it, “Minister Anupong said. “It is against the law.”

The minister’s comments came after a delegation of five sea gypsy representatives were allowed to submit the letter to Secretary-General Wilas Aroonsri, who accepted it on behalf of PM Prayuth.

And the PM himself told members of the press that he was aware of the land dispute, but that his hands are tied according to the law.

“I accepted the letter and will see what we can do,” PM Prayuth said. “At this stage, I cannot promise anything beyond what the justice system decides. What we can do is to prove who lawfully owns the land and how they obtained the title. We can only do what the law allows.”

The plan to have the government buy up the land was proposed by some of the title deed holders, who, exasperated with a stalemate following a violent confrontation earlier this year, said they were tired of the never-ending dispute (story here).

At a meeting called by Governor Chamroen, Baron World Trade Ltd Co representatives initially offered to give the sea gypsies 2 ngan, approximately 800 square meters, of land on a different portion of the property to perform their ceremonies. That offer was refused. (story here).

“The government attempted to find them a piece of land, but they insisted on staying where they are, where their ancestors lived and where their traditional ceremonial sites are located,” PM Prayuth said. “We are willing to help solve the problem, but the sea gypsies must cooperate with us as well.”