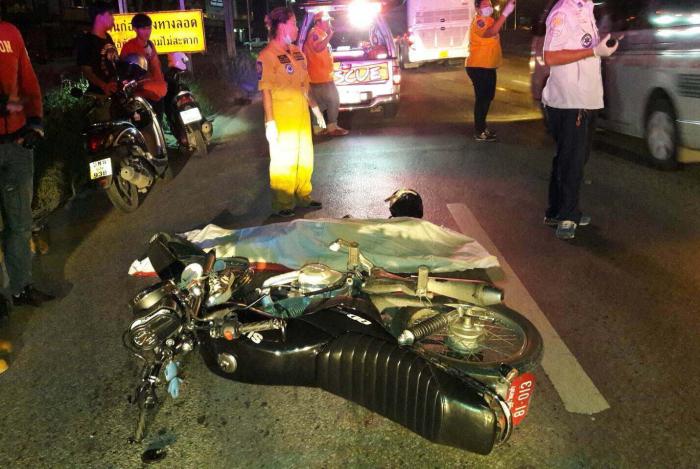 PHUKET: Two motorcyclists died in two separate mysterious accidents on Thepkrasattri Road in the early hours of Sunday – one a woman in her mid twenties, the other a man, also in his mid twenties.

Police responded to the first accident in Koh Kaew on the northbound lanes of the road at about 2.30am.

“We received a report that there had been a collision between a pick-up truck and a motorcycle, but there were no eyewitnesses and it was not clear how the accident had occurred,” Phuket City police chief Nucharee Longkaew told the Phuket Gazette.

They found the bloody body of an unidentified woman at roadside.

“The victim was a female, about 25-30 years old. She was wearing a black top and blue jeans and was covered in blood. We found no identification on the body and there was a heavily damaged Honda Wave motorcycle at the scene. A pick-up truck with a damaged back window was parked there. The truck’s owner was absent,” said Maj Nucharee.

Two hours later, Phuket City Police responded to a second collision on Thepkrasattri Road; this one in the southbound lanes in Bangku, near the underpass construction site.

Phuket City Police Captain Suchat Meelumpong said police responded to the Bangku accident at 4:30am to find the body of a man aged 25-30 years old in a pool of blood in the middle of the road. He was wearing brown shorts and a black T-shirt.

“No identification was found on the body. Only some money and a phone,” said Capt Suchat.

Again, there were no eyewitnesses to give police an account of the incident. However, a damaged Suzuki motorcycle lay nearby – a length of metal construction wire tangled in the bike’s undercarriage.

Rescue workers also spotted a chipped curbstone lying in the left hand lane, a few meters from where the bike and the body lay.

A Vachira Phuket Hospital spokesperson confirmed this morning that relatives of both victims had now come forward to identify the bodies. However, police were yet to confirm and release the identities of the two victims.