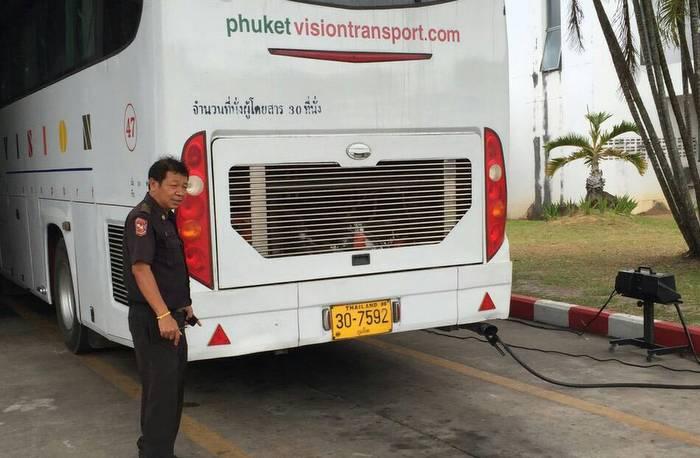 PHUKET: Officials banned a pollution-belching Phuket bus from service after it failed its emissions test yesterday.

The Phuket Land Transport Office (PLTO) was alerted to the bus’s condition through a complaint made by a concerned citizen who sent in a photo of the vehicle’s plate number.

“The black carbon emissions expelled from diesel exhaust cannot exceed 45 per cent. However, this bus’s emissions measured 99.8 per cent,” said Jaturong Kaewkasi, chief policy adviser at the PLTO. “Technically, when we run the tests we round up to the nearest integer, so the measurement was actually 100 per cent.”

PLTO officers charged the driver, who they declined to name, for using an inappropriate public transport vehicle and banned it from use.

“The charge carries a fine of up to 50,000 baht. However, we do not expect to fine the driver the maximum amount. The point is to have him fix the vehicle and get emissions back to legal levels,” Mr Jaturong said.

Mr Jaturong urged the public to send his office any information about vehicles that are thought to be bellowing illegal amounts of black carbon into the air.

“Anyone who sees vehicles emitting black smoke or appear to not be in proper running order, please let us know by calling the PLTO at 1584,” Mr Jaturong said. “Make sure to record the plate number, date and time of the incident. Photos are always helpful too, as they show proof of the complaint and help prevent people from making fake reports.”