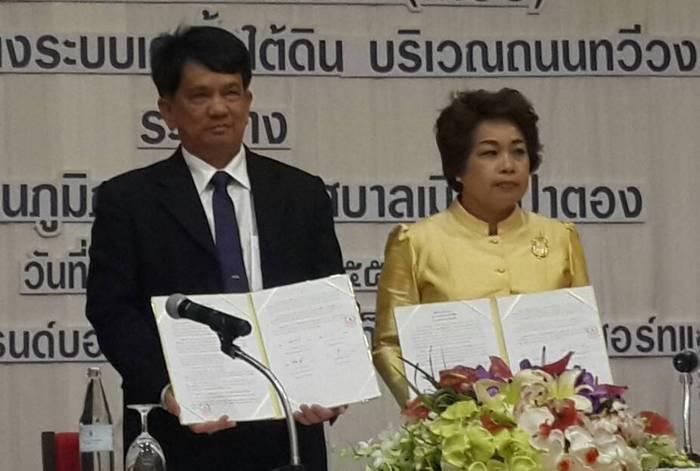 PHUKET: The project to bury the unsightly power cables stretching along Patong’s beachfront road is slated for June next year.

The start date of the project was announced during the signing of a Memorandum of Understanding between Patong Municipality and the Phuket Provincial Electricity Authority (PEA) yesterday.

“The PEA chose to work with Patong Municipality because it is a primary tourist destination on the island; it drives the economy of Phuket,” said Panya Laochu, acting managing director of the PEA. “At present, tourists are faced with messy, disorganized cables that destroy the beauty of the area and are difficult to maintain.”

The 230-million-baht project, which will cover the three kilometer stretch of Thaweewong Road, will be jointly funded by both groups, with the PEA providing 153mn baht and the municipality contributing the rest.

Funding for the project was originally a point of contention between Patong Mayor Chalermluck Kebsup and municipality councilors.

“The council supports the project, but we will not sacrifice the town’s kindergarten-expansion plans or disaster-relief fund in order to beautify the Patong beachfront [story here],” Councilor Weerawit Krueasombut explained to the Phuket Gazette last year (story here).

The project is scheduled to be completed by the end of 2017, confirmed Mayor Kebsup.