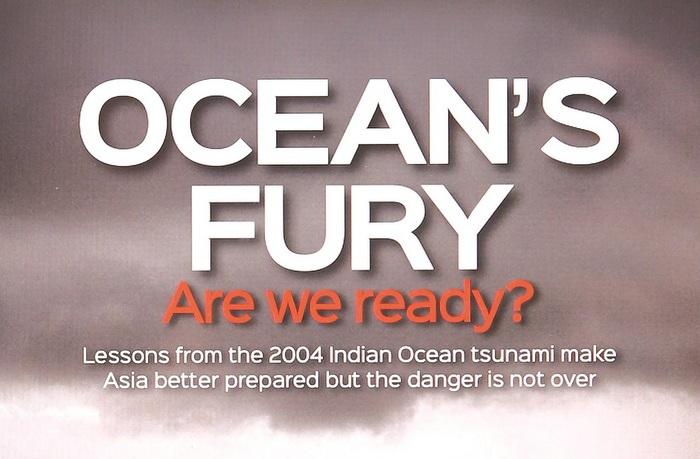 PHUKET: The Asia News Network / Phuket Gazette joint publication on the 10th anniversary of the Indian Ocean Tsunami won a gold medal at the 6th Digital Media Awards, presented in Hong Kong on November 18 by Google and the World Association of Newspapers and Publishers.

The publication, entitled “Ocean’s Fury: Are We Ready?” was presented and submitted by The Straits Times of Singapore, which collaborated with The Jakarta Post from Indonesia, The Island from Sri Lanka, The Star from Malaysia, and The Nation and the Phuket Gazette from Thailand.

Ocean’s Fury won the gold award in the Best Data Visualization Project category. Close to 100 articles and hundreds of photos and graphics were produced for the publication, and some 50 writers, photographers, designers, artists and editors were involved.

“The tsunami was a disaster that hit people all round the region. When tragedy struck, the way the people of the region responded brought them closer together. So it was fitting that a project to commemorate those collaborative efforts should be done collectively by ANN partners,” said Straits Times Editor Warren Fernandez, who is an ANN board member.

ANN initiated the Ocean’s Fury project last year, not only to recount what had happened, but also to see if indeed the promise to help rebuild communities and lives had been delivered, said Mr Fernandez.

“We also wanted to ponder the lessons that might have been learned from the traumatic experience,” he added.

Because of the international media’s focus on Phuket in the wake of the tsunami, which killed more than 230,000 people across 14 countries, the Gazette‘s reporting played a key role in the joint publication as Gazette journalists explored the status of the current tsunami warning system, survivors’ stories and the role of local media when confronted by such devastation.

“Though Phuket and Phang Nga were not the worst hit areas, the tsunami did destroy entire communities and broke apart countless families in these two Andaman region provinces. The publication wasn’t just about returning to the devastation; it was about exploring the lasting effects and the beautiful resilience of the local people and places affected,” said Phuket Gazette Managing Editor Isaac Stone Simonelli. “It was an honor to get to work with members of ANN in commemorating an event that had such massive impacts on our community.”

The Gazette stories were combined with content produced by a number of ANN members for both print and website publication. The content was edited by The Star and an e-book was put together by The Straits Times‘ digital team.

“It took some effort to get everyone together, but I am glad we did. The award shows just what we can achieve together,” said Pana Janviroj, executive director of ANN and president of The Nation.

Founded in 1999, ANN is an alliance of 22 media in 19 Asian countries seeking to promote coverage of Asian affairs.