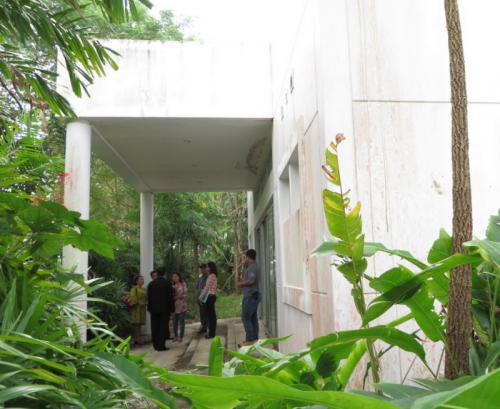 PHUKET: Owners of an abandoned resort in the foothills of Patong have refused to take down part of their structure to re-open access to the land behind it.

The land in question, valued at 40 million baht per rai because of its panoramic view of Patong, cannot be developed without access, said landowner Utaiwan Van-Zandt, who has been fighting to re-open a pathway since 2009, when the resort was built.

There is no doubt that landowners are owed access to their property, said Kathu District Chief Sayan Chanachaiwong when he inspected The Crest Phuket resort on December 12 (story here).

“The pathway across the resort land was marked on the Chanote issued by the Land Office to the resort owners. This proves that the pathway was there before the owners built the resort,” Mr Sayan explained.

“That means, by law, the resort owners must continue to provide access across their property for the people who own land behind it,” he said.

Kathu District officers had issued an order to the owners to give way once before, on September 7. However, as they were unable to determine where to send the order, they simply posted it at the entrance to the resort.

At some point after the December inspection, officials received a response from the Crest owners.

“They wrote that they are acting within their legal rights and insisted they would not remove any structures,” said Chief Administrative Officer (Palad) of the Kathu District Office, Sukanda Huangrattanakorn.

“They are in the wrong. The Chanote shows that a portico on one building and a wall are blocking the public pathway. By refusing to remove these, they are making the land behind the resort essentially worthless.”

“I thought that the story had disappeared. It’s already been two months since the inspection,” said Ms Utaiwan.

Kathu officials explained that the case was moving slowly because their office has been closed by protesters.

“We have the option of taking the case to court right now,” said Ms Sukanda, “but that would be very time consuming. Negotiating could be faster, and I hope to have all parties at the table sometime this month.”

However, if the three-month period given by V/Gov Somkiat expires and the owners still refuse to negotiate, “We will sue them,” she said.