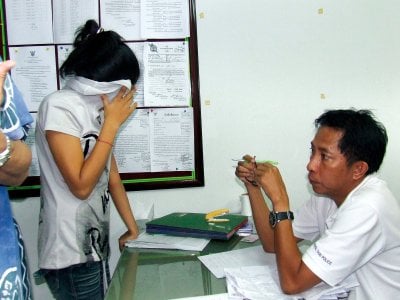 PHUKET: Phuket is on track to set a record number of deportations of illegal workers this year, with at least 7,086 illegals having been deported from the province in 2010, according to the latest statistics from the Phuket Immigration Office.

Announcement of the figures comes on the heels of a nationwide crackdown by special immigration task-forces ordered by Deputy Prime Minister Sanan Kajornprasart.

The task-force responsible for Phuket was sent from the Surat Thani Immigration office. The force included local immigration officers who sought and deported illegal workers from May 20 to June 21.

The crackdown was conducted in conjunction with the Thai government campaign to register all foreign labor in Thailand. For our previous report, click here.

The worker registration process is still far from complete, as it first requires government officials to compile lists of alien workers in the country.

The lists are then sent to Myanmar, Laos or Cambodia for confirmation of the workers’ nationalities. The workers must also personally obtain documentation proving their nationalities.

The Cambodian and Lao governments have set up identification centers in Bangkok, but Myanmar has not, forcing their citizens to return home to secure personal identification documents.

The list of alien workers in Phuket submitted for review included approximately 50,000 names, of which about 5,327 have been confirmed by their home countries, Mr Nopadol said.

A total of 55,316 Burmese, Lao and Cambodian laborers are permitted to work in Phuket.

“For the remaining people [alien workers], more than 40,000, it will take about a year, as there are many waiting to be approved. In Thailand there are around one million Burmese alone, all of whom must be processed,” said Phuket Provincial Employment Office (PPEO) Superintendent Nopadol Ployoudee.

The PPEO has yet to receive instruction on how to handle cases of alien workers not confirmed as nationals of other countries.

Mr Nopadol said that upon confirmation of their employees’ nationalities, employers must contact the PPEO within 30 days to have work permits issued for them.

Cabinet has set a February 2012 deadline for completing the national identification process, he added.

Mr Nopadol cautioned employers not to hire undocumented alien workers and advised anyone with knowledge of such activity to call the PPEO at 076-219660 or 076-219661.

“The number of illegal alien workers in Phuket is about the same as those who are here legally and is likely higher,” he said.

“Phuket is a developed area with a lot of construction, tourism and fisheries, so many people come here to work because they can get good salaries.

“Also, employers in Phuket really like Burmese workers and feel that they are like family, and the employees are happy to stay long-term,” Mr Nopadol said.

Dems to hold “Crisis Seminar’ in Phuket this weekend