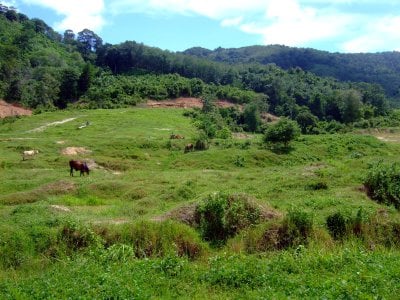 PHUKET: Construction of the 5.7-million-cubic-meter Klong Krata reservoir in Chalong has stalled because the Ministry of Natural Resources and Environment (MNRE) has yet to approve a request to use a 60-rai plot needed for the project.

According to Isara Anukul, chief of the water allocation division at Phuket Provincial Irrigation Office (PPIO), construction was planned to begin this year and be completed in 2012.

“But approval for 60 rai of forest land from the Department of Natural Resources and the Environment remains outstanding,” he said.

The initial request by the PPIO to use the land was submitted three years ago.

PPIO Director Weerawat Aungsupanith told the Gazette in early March that approval for the plot was not far off. “I think it will take about one or two months,” he said.

In April 2007, Irrigation Department official Theerachart Sangkaha, then in charge of the project, reported during a meeting at Provincial Hall that approval from the Forestry Department for use of 157 rai of the 430-rai, 960-million-baht project had “already been granted” and that the project would be finished in 2009.

What has forced the delay has never been announced, but it is likely not related to protests by environmentalists or attempts by officialdom at environmental preservation.

Local people are generally behind the project, which includes a ring road and recreational park to spur economic development in the area.

As for the environment, its natural beauty was long ago compromised by tin-mining and rubber plantations. The most notable developments in the area are the Luangpoo Supha Temple and a golf course constructed by a family of former tin-mining-concession holders.

Construction of the 720-meter-long, 25-meter-high dam, with all its potential for agricultural development, and recreational and tourism activities, must be considered a boon even by environmentalists.

Beyond question Phuket needs it. Although one of the rainiest places on earth, the island has suffered chronic water shortages for decades – and demand continues to grow with the island’s steadily rising population.

The smaller reservoir, behind Phuket Rajabaht University, is a former tin mine pond that will be expanded to 15 rai and its storage capacity increased to 50,000m³ under a 14-million-baht budget.

The other, off Pracha-uthit Rd, will hold 500,000m³ of water and cover 90 rai when the 27-million-baht contract is completed. Both projects are expected to improve water supply in Rassada, where shortages are common.

Over 7,000 alien workers deported from Phuket this year