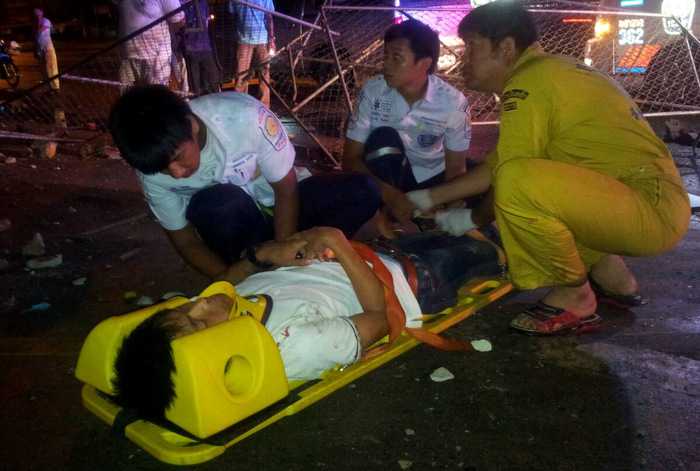 PHUKET: An Orient Thai Airlines mechanic will be charged with reckless driving after he and his colleague crashed into a Phuket used car lot at high speed early this morning.

The two mechanics were driving an Orient Thai company pick-up from Phuket International Airport to Phuket Town at about 2am when the vehicle careened off the road.

“Witnesses said that the pick-up was travelling at high speed when it smashed into an electricity pole and then careened into Vichit Smart, a secondhand car lot,” said Col Sanit Nookong of the Thalang Police.

The pick-up came to rest after slamming into two used cars on display in the lot.

Rescue workers from the Kusoldharm Foundation first pulled 23-year-old driver Pornphom Inthachet, from Bangkok, out of the wreckage. He suffered only minor cuts and bruises.

“The other mechanic, 23-year-old Bunyawat Peawkhuntod, from Lop Buri, was unconscious and had to be lifted out of the passenger seat and onto a stretcher,” said Col Sanit.

Both men were taken to Thalang Hospital for treatment.

“The pick-up has been taken to Thalang Police Station. Mr Pornphom will be charged with reckless driving,” confirmed Col Sanit.