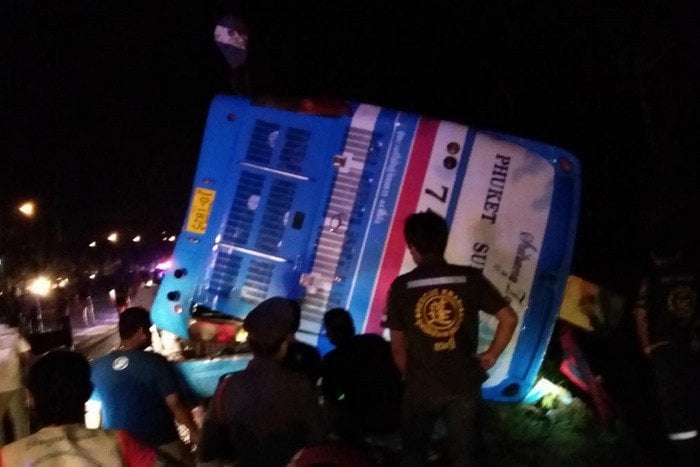 PHUKET: A bus en route from Phuket to Narathiwat flipped on a wet road in Krabi last night, killing one passenger and injuring 31 others.

The body of 26-year-old Marina Sama-ae, a nurse from Narathiwat, was trapped inside the bus when police arrived just after midnight, said Capt Prasan Khongkaew of the Ao Luek Police.

“The bus was turned over on its side, so we had to bring it upright in order to reach the body,” said Capt Prasan.

The bus driver, 62-year-old Chob Jamrern, and 30 of the 51 passengers sustained minor injuries in the accident.

Mr Chob and 13 passengers were taken to Krabi Hospital for treatment, while the remaining 17 injured were taken to Ao Luek Hospital.

“The bus was on its way from Phuket to Sungai Golok in Narathiwat province when it started raining heavily in Klong Hin, in Krabi’s Ao Luek district, causing the road to become slippery,” Capt Prasan explained.

“Mr Chob lost control when the wet road narrowed from four lanes down to two. The bus flipped and crashed on the side of the road.”

Mr Chob has been charged with reckless driving causing injury and death.