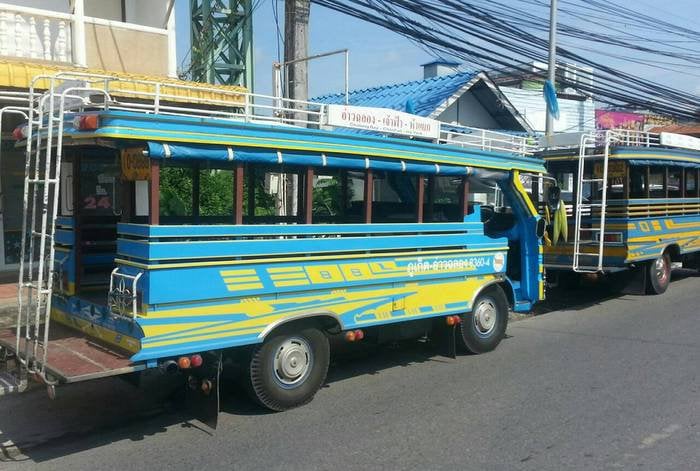 PHUKET: Two songtaew operators were called to a meeting at Chalong Police Station on Thursday after the Chalong-Phuket Town operator filed a complaint against the Kata-Karon-Phuket Town service for breaking an agreement regarding pick-up points.

However, a spokesman for the Kata operator, who asked not to be named, claimed that they were simply following the requests of passengers wishing to be dropped off, even though the driver had already informed them of the songtaew‘s destination.

Furthermore, the spokesman said, people board their songtaew while the other passengers are disembarking, without checking the destination.

According to the agreement between the songtaew operators, the designated inbound drop-off/pick-up points for the Kata-Karon-Phuket Town service are the K-mart convenience store in Chalong, the Chalong Tesco Lotus, Wat Chalong, Dibuk Clinic and the Darasamuth intersection.

However, outbound to Kata-Karon, the songtaew is only allowed to pick up new passengers at the K-mart bus stop and drop them off in Kata, without any other stops in between.

“We called the two representatives to the station so that they could discuss the terms that had been broken,” said Chalong Mayor Samran Jindaphol, who was also present at the meeting.

“While we are waiting for the Phuket Transport Committee to consider a new arrangement between the two operators, I would like to ask that they follow the conditions of their former agreement,” Mayor Samran said.