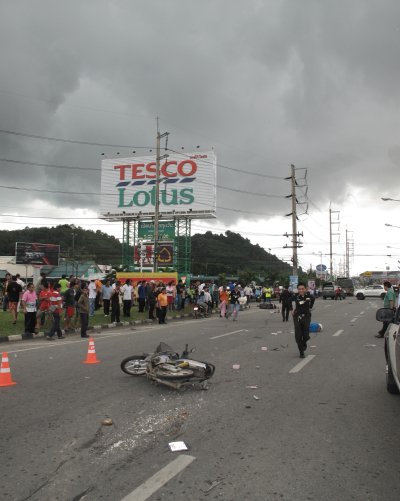 PHUKET: A young student is dead and two other people seriously injured after a 22-wheel tractor-trailer rig slammed into two motorcycles at the Tesco-Lotus junction at around noon today.

Witnesses told the Gazette that the truck, traveling on the bypass road southbound, ran a red light as westbound traffic pulled out of Yaowarat Road in the direction of Kathu.

One of the victims, a female student wearing a secondary school uniform and crash helmet, was killed instantly. Her leg was completely severed at the knee.

There was no sign of the driver at the scene when the Gazette arrived, but his rig was parked near the intersection.

Two other people, critically injured in the smash, have been admitted for treatment at Vachira Phuket Hospital.

Police are now investigating the crash.

Although the four-way Tesco-Lotus intersection is clearly marked and has countdown traffic lights, it has been the scene of numerous traffic fatalities in recent years.