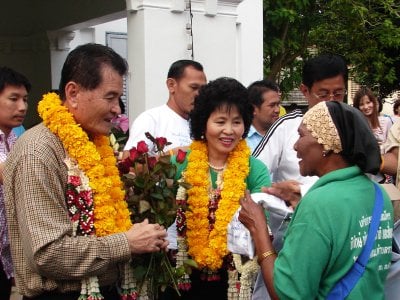 PHUKET: Governor Wichai Phraisa-ngop and his wife Thaisika left the Governor’s Mansion early this morning, his Mercedez-Benz trailed by a van full of Phuket government officers and members of the media who will travel with him all the way back to his home in Nakhon Pathom.

Among the 300 people who got up early to send off Gov Wichai was the man who will be the next occupant of the Phuket Governor’s Mansion: Vice Governor Tri Augaradecha.

Another who will also be taking up residence at a Governor’s Mansion soon is Phuket Vice Governor Teerayut Eimtrakul, who will become the new governor of Surat Thani on Friday.

The moves come as part of a Ministry of Interior reshuffle that coincides with the start of fiscal 2011.

They formed a line and presented Gov Wichai and his wife roses. In return they received T-shirts bearing a message in Thai thanking everyone for their cooperation, as well as a Buddha image pendant.

“My successes in Phuket are not a result of my own efforts, but the cooperation of everyone involved. I would like to say thank-you to everyone. I hope you have good lives filled with luck,” he said.

Gov Wichai, who retires from official government service on Friday, has gone out with a flurry of activity.

He was recently seen on a local cable television channel distributing 1,000-baht banknotes to members of the press who took part in an amusing dance wearing masks bearing his resemblance.

Attending the recent opening of a center in Phuket Town to exhibit handicrafts made by students in the Non-Formal Education system, he tried his hand – and hips – at using a hula-hoop, eventually succeeding in getting the hang of it.

For more on Mr Wichai’s departure and plans for the future, pick up a copy of this week’s Phuket Gazette, due out on the newsstands this Saturday. (Digital subscribers will find their copy here, anytime after 6pm on Friday.)