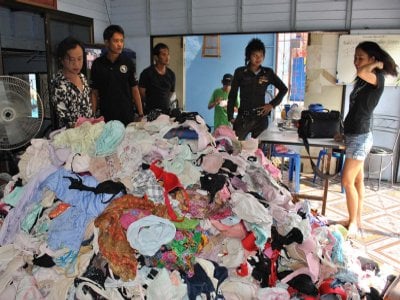 PHUKET: A motorbike taxi driver caught red-handed with a bag full of used bras and panties was later found in possession of thousands of women’s undergarments at his home.

Most of the items were found hanging from walls inside Mr Phanu’s apartment, while others were scattered in piles on the floor. Still more were stuffed into plastic bottles.

After his arrest, Mr Phanu told police that the sight of women’s underwear sexually aroused him, so he stole them and used them for “sexual gratification”.

After receiving numerous reports of panty theft from young women in the area, Mr Chuchart handed Mr Phanu over to police on September 26.

Mr Phanu told police that some of the underwear was given to him, some he bought himself and the rest was snatched from washing lines outside apartment blocks and rental homes in the neighborhood.

Mr Chuchart said he went to investigate after hearing reports of stolen underwear from teenage girls, students and night workers.

On the morning of September 26, Mr Chuchart was searching the neighborhood with a police officer when he noticed Mr Phanu acting suspiciously.

When they opened the suspect’s bag, they found it full of women’s underwear.

Mr Chuchart is asking any women in the area who have lost underwear to come forward to inspect the panty haul and see if their undergarments are among those swiped by Mr Phanu.