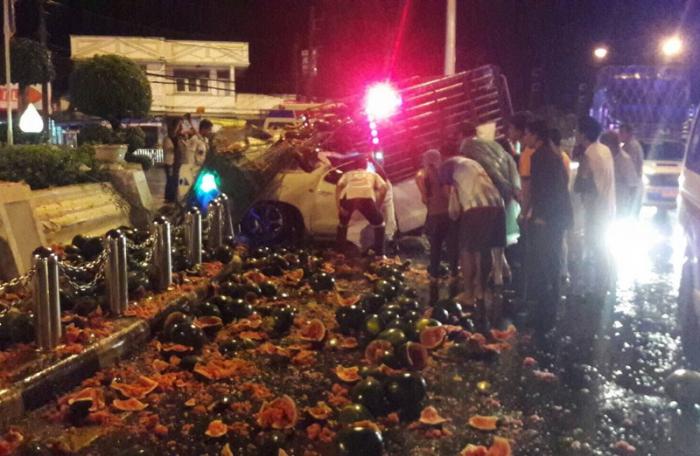 PHUKET: One man was killed and another seriously injured when a watermelon delivery truck crashed into the steel pillars surrounding the Heroines’ Monument early this morning.

Police and rescue workers rushed to the scene about 5:45am.

“The truck was stuck to the pillars, while pieces of broken fruit were strewn everywhere. Rescue workers had to separate the vehicle from the fence in order to help the occupants, one of whom was already dead,” said Capt Kraisorn Boonprasop of Thalang Police.

The deceased was the driver of the truck, Somsit Reden, 43. The passenger, Sarawuth Prawong, 18, sustained serious injuries to his back.

Both were taken to Thalang Hospital.

Mr Sarawuth told police that they were on their way back from Krabi to deliver four tonnes of watermelons in Patong. He believes that Mr Somsit might have lost control of the truck due to slippery road conditions in the rain.

A similar collision at the Heroines’ Monument last month killed a Phuket police officer ten days after he was seriously injured there (story here).