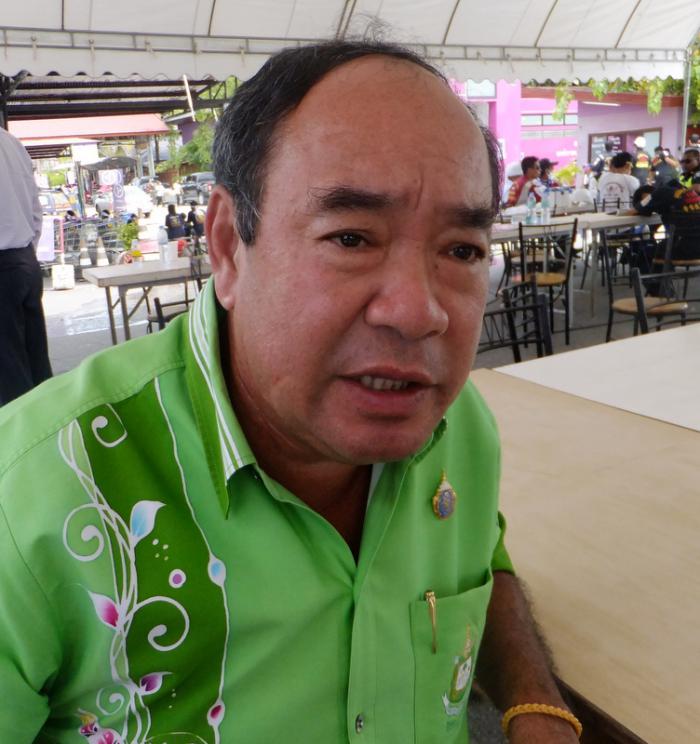 A housing developer faces legal action if he continues filling in a lake north of Samkong. Soil-dumping as part of an anti-erosion project may continue as long as health issues are addressed.

PHUKET: Rassada Municipality is preparing to file a police complaint if the lake filling at the Srisuchart Grandview housing estate, located on the bypass road, extends beyond “containing bankside erosion”.

The municipality ordered Srisuchart Grandview Co Ltd to shore up the banks of the lake to prevent erosion, as reported on page one of the December 14 issue of the Gazette.

However, the company began adding soil to the banks in an area not indicated by the municipality before being stopped and redirected to the area of erosion.

At one section of the lake, dump trucks filled in more than 70 meters from where the bank once stood – far beyond the 30m tract approved that allowed the dump trucks delivering the payloads of soil to turn around.

Yet, it was public pressure through protest and a raft of serious health issues that prompted the threat of legal action and a “ban on the entire project” by Rassada Municipality.

“We ordered work to cease on March 6 following a protest by local residents. They called for action to be taken to reduce the noise and dust created by the trucks hauling soil into the area,” explained Rassada Mayor Phudit Raksarat.

Work on containing the bankside erosion was allowed to resume, but only after the contractor agreed to implement eight countermeasures to reduce the noise and dust created by the incessant parade of dump trucks.

“We are only allowing them to continue the anti-erosion work, of which about 20 per cent remains to be done.

“If the anti-pollution measures are not adhered to, or if they start dumping soil in the lake where it does not counter erosion, we will file a police complaint against the contractor and the landowner.”

Kasem Sukwaree, chief of the Phuket office of the Ministry of Natural Resources and Environment (MNRE), said that reinforcing the banks to stop erosion was not a problem.

“Exactly how much can be filled in is at the discretion of the environmental experts at Rassada Municipality,” he said.

“I think 30 meters would be about right, but 70 meters is too much. That’s not for erosion control. It means they want to do something on the land – and that is illegal.”

Mr Kasem also clarified that a landowner cannot fill in a lake on his own land – even if the landowner has a Chanote title for the property.

“Anyone wanting to carry out any form of construction that will affect a natural water resource must first have the permission of our office, as stipulated by the National Environmental Quality Act [NEQA].”

Section 12 of the act empowers local administrations, such as municipalities, and MNRE offices to preserve any water resource as a utility for people living nearby and to prevent public hazards such as flooding, Mr Kasem explained.

Although Mr Kasem extolled the importance of preserving natural water resources, he admitted that he was not aware of how important the Srisuchart lake might be.

“We are responsible for overseeing the ‘big view’ in Phuket,” he said. “When it comes to specific information about the importance of lakes in each area, the local municipality or even local residents would be able to give better information than us.”

To that, local resident Veerayuth Sengsawang, 42, explained to the Gazette that the Srisuchart lake was the primary catchment for rain runoff from the hills that run along the west side of the bypass road.

“We have three lakes in the area. The lake being filled in is the biggest and on higher ground than the others,” he said.

“Water flows from this lake to the other two. If this lake is filled in, more water will flow very quickly to the lower lakes and cause flooding.”

Chief Kasem was also at pains to point out that his office had no authority to initiate any legal action.
“By law, the MNRE has no authority to press charges or file police complaints against people we believe have broken environmental laws,” he said.

“We can investigate when called on by local authorities and pass on any complaints we receive to the relevant local administrations, but other than that there is nothing we can do.”

Mr Kasem said he had sent two formal notices to Rassada Mayor Phudit over the past year, reminding him of the MNRE’s duty to preserve natural resources.

“We sent a notice in July last year and again on February 13, but we have not received any requests to investigate any water resources in Rassada,” he said.

“The mayor has yet to file a complaint to the police. Whether that is done depends entirely on the municipality.”