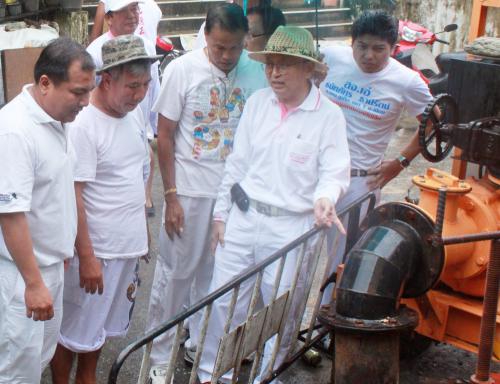 PHUKET: The Phuket Provincial Administration Organization (PPAO) will spend over 19 million baht on a water gate to help alleviate flooding in Patong.

The news came at a meeting on Tuesday between PPAO President Paiboon Upatising and Phuket Governor Maitri Inthusut to discuss strategies to prevent flooding in Phuket.

The areas of top concern discussed in the meeting were Patong, Sri Soonthorn and Phuket Town.

“We have allocated over 19mn baht to build a water gate to prevent high tides contributing to flooding in Patong,” said Mr Paiboon.

“The PPAO council has approved the budget and the project should be completed within the coming year,” he said.

Wassana Sriwilai, Director of PPAO’s Engineering Division, explained that the sluice will be installed at the south end of Patong Beach, near where a bridge crosses the Pak Bang Canal.

“The gate will be closed when there is heavy rain and a high tide at the same time. With the gate closed, seawater won’t be able to enter the canal and prevent it from emptying into Patong Bay.

“When the gate is closed, we will pump water from the canal into the bay to make sure the water keeps flowing and that the canal does not back up and cause flooding further upstream,” Ms Wassana told the Phuket Gazette.

“We have yet to start looking for a construction company to complete this project. At this stage, the project has been approved and we will start the bidding process as soon as possible,” she added.

Earlier on Tuesday morning, before his meeting with Governor Maitri, PPAO President Paiboon inspected the canal that runs alongside Luang Por Road in Phuket Town.

A water gate moderates the flow of water through that canal, ensuring that it is not overloaded further downstream, which could create flooding during periods of heavy rain.