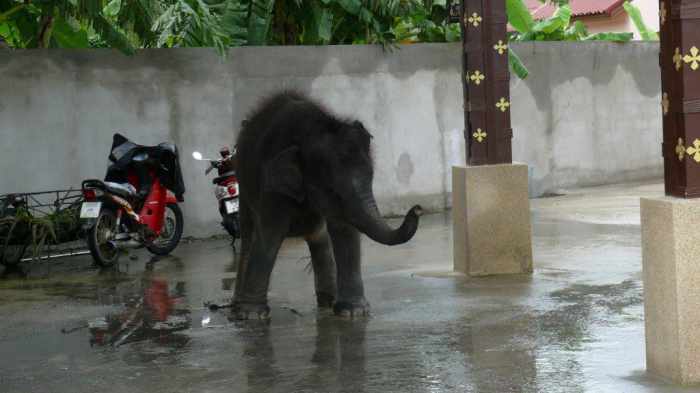 PHUKET: A woman elephant trader will present herself to the Livestock Office tomorrow to prove she has legally acquired a baby elephant that is being kept on a small chain in the parking lot of a Phuket market.

Officers from the Phuket Livestock Office this week moved quickly to investigate a tip-off that the baby elephant was bound on a short chain at the OTOP Dottu Market on Chao Fa West Road in Chalong.

“The elephant is named Tiptawee and is two years old,” Veterinarian Taweesak Sawasdivet of the Phuket Livestock Office said.

“The owner, Pichitra Tanode, presented herself immediately and assured us that she had the correct permits. We agreed for her to bring the documents to our office tomorrow.”

“She was well fed and in good health,” he told the Phuket Gazette.

“Also, as elephants are powerful creatures, it’s common to see baby elephants chained tightly so they cannot move too freely. Chains being too long can actually cause them more harm.”

Ms Pichitra told the Gazette that Tiptawee was delivered from Ayutthaya several months ago.

“I have been legally trading in elephants for more than 10 years,” she said. “I know the laws well and I am happy to answer any questions.”

However, Awat Nitikul, the chief of Phuket’s Khao Pra Taew Wildlife Conservation Office, today told the Gazette that Ms Pichitra would face legal action if she did not have the correct permits for possession and legal transport of Tiptawee to Phuket.

Importing an elephant into Phuket without a permit carries a penalty of six months in prison, a fine of up to 10,000 baht, or both (story here).

Also, Col Watcharin Phusit, Superintendent of the Regional Natural Resources and Environment Crime Suppression Division, has previously warned that making and using fraudulent documents for trading elephants carries a fine of up to 40,000 baht, imprisonment up to four years, or both (story here).

“And Tiptawee would be sent to the Thai Elephant Conservation Center in Lampang,” Mr Awat said.

Video Report: Call rings out across the Kingdom for Miss Phuket Universe beauties