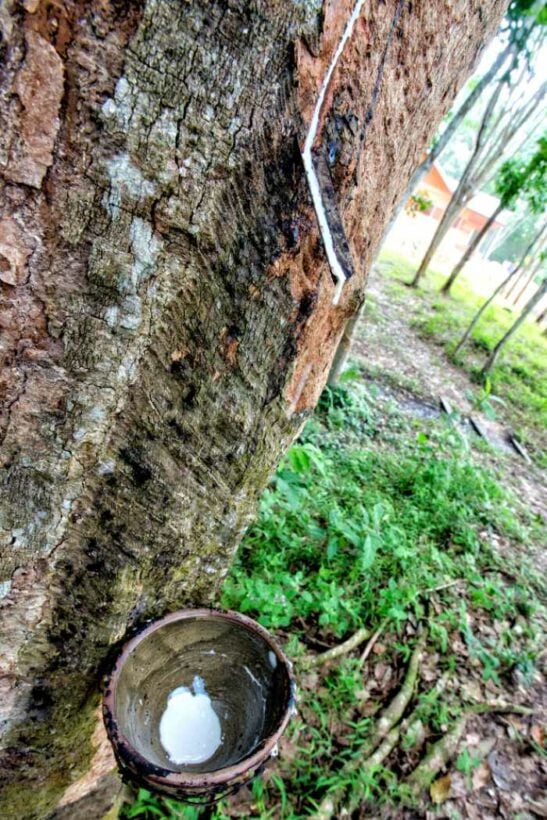 PHUKET: Visitors to Phuket are often perplexed by the many things going on around them. Following a recent visit to a working rubber plantation and whirlwind tour of the world’s largest rubber factory, many of the questions I had been accumulating over the years, regarding the omnipresent farms blanketing Southern Thailand, were answered.

A number of useful innovations were spawned following the discovery of rubber’s potential. However, it wasn’t until the process of vulcanization (the addition of chemicals to enhance various desirable properties) was discovered in 1840 by Charles Goodyear – as in Goodyear the tyre manufacturer – that its applications increased exponentially.

Once the booming automotive industry became dependent on rubber for tyres and other parts, production erupted. Endemic to the tropical Americas, the vast quantities of rubber trees growing wild in the northern Amazon were the first to be exploited.

In the late 19th century, rubber seeds were smuggled out of the Amazon to Britain where high-
yielding strains were developed and subsequently brought to Southeast Asia, in particular Malaysia, to be grown. Seeds were smuggled north once again into Thailand, which now stands as the world’s largest producer of natural rubber.

In Phuket, and all over southern Thailand, unbroken lines of rubber trees with little catchment bowls dangling, stretch off in every direction. As a monoculture crop, rubber trees are attractive since they are fairly hardy and once established, produce latex year after year.

Many tree-based crops take years before they begin producing and rubber is no exception with farmers having to hold out for seven years before tapping their trees.

However, as can be witnessed all over Phuket, young rubber trees are planted far enough apart and allow light through their canopies for other crops to grow amongst them – such as the famously sweet and delicious Phuket pineapples.

Pineapples can flower and produce fruit in about 18 months providing rubber farmers income from their land in the long wait to tap their rubber trees. Farmers claim that pineapples and rubber trees have a symbiotic relationship, with one depleting the soil of certain nutrients, while the other replenishes. Thailand has been one of the top five producers of pineapples for years.

About 95 per cent of the 12.5 million rai of rubber plantations are small-holdings run by about one
million families. It seems like a large number of people until the fact is revealed that every tree is tapped, the latex collected, and is all initially processed by hand.

The tapping process must be carried out at night since sunlight and warm daytime temperatures cause the latex to coagulate before reaching the collection container. Workers embark at midnight and make a shallow diagonal cut halfway around the trunk of the tree just below the last cut.

“The way they cut it, they have to have a technique… if they cut too deep they will injure the tree and the next thing you know it will have some deformities that affect its lifespan,” explains Marketing Assistant at Von Bundit, Michael Ong.

The latex removed from the tree is of low viscosity and quickly drips down the cut and off a small metal spigot into the collection cup. Workers then revisit every tree around daybreak to collect the liquid latex.

One rai contains 60 trees, which can produce 3 kilograms of latex per day on average.

Once the latex is collected, three liters is mixed with two liters of water and a small amount of formic acid to induce coagulation. Blocks of bright white latex with the look and consistency of fresh mozzarella cheese are then run through a series of presses to flatten the blocks and remove moisture.

The floppy sheets are then hung on lines to dry for three days and subsequently moved to lines
indoors to dry slowly for an additional month.

These rubber sheets, which are then purchased by second-dealers – a type of middleman – make
up the higher-grade rubber that processing facilities sell.

Once the sun rises, a small amount of latex continues to drip from the cuts made in the tree. After it coagulates in the collection cups, it is harvested and sold as a lower-grade material they call “cup lumps”. This rubber undergoes less processing and is delegated to making things like shoe soles and rubber bands.

Once the second-dealers have sold the rubber sheets to the processing factories, they are evaluated for quality and workers cut out contaminants. They are then hung on racks in smoking rooms where they remain for three days to remove even more moisture from the rubber.

“Smoking is to get more DRC [dry rubber content] out of the rubber sheets. The rubber sheets that we are buying from the market consist of around 90 per cent DRC, and then after the smoking process this increases to around 97 to 99 per cent,” explains Mr Ong.

Once a rubber tree’s production has dropped off, it is cut down and destined to fuel the smoking process.

The production of natural latex over synthetic versions has its benefits. The labor intensive process keeps millions of people in work – especially those from less fortunate backgrounds with limited employment options.

As is frequently the case, there is a flipside. Having a monoculture of any variety has consequences for the environment. Pests that feed on this particular crop run rampant and, typically, farmers increase pesticides in response. Although the trees can make soils hospitable for certain species, they deplete other nutrients that have to be supplemented with fertilizers.

Monocrops also devastate the diverse ecosystem that many animals depend on for their habitat, a scenario seen with the endangered status of orangutans in Malaysia, Indonesia and Borneo – a result of intense oil palm production.

Although synthetic rubber and the potential for more lucrative crops for farmers poses a threat to natural rubber production, our current level of dependence on this resource ensures that the latex will keep on flowing.

Local art on show this week at Central Festival