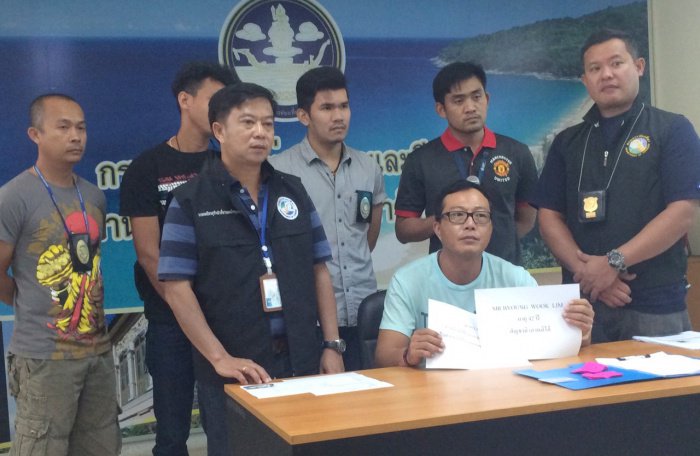 PHUKET: A South Korean national was arrested in Chalong today for working as an illegal tour guide for Narae Travel Co Ltd.

Phuket Immigration Police, together with the Ministry of Tourism and Sports (MOTS) Phuket Office officials, apprehended Byoung Wook Lim, 43, while he was guiding a group at Chalong Pier.

“We seized a list of tour programs, customer names and brochures of tourist attractions in Phuket, Krabi and Phang Nga that they organize tours to,” said MOTS Director Santi Pawai.

Mr Lim was in possession of a work permit. However, his position was listed as managing director of the company. Tour guide positions are reserved specifically for Thai nationals.

Recently, dozens of local tour guides gathered outside of Phuket Provincial Hall to present a letter demanding serious action be taken by authorities against illegal tour guides on the island (story here).

“Mr Lim confessed that he had been working as a tour guide for two years,” said Mr Santi. “His work permit has since been cancelled and he will now face deportation.”