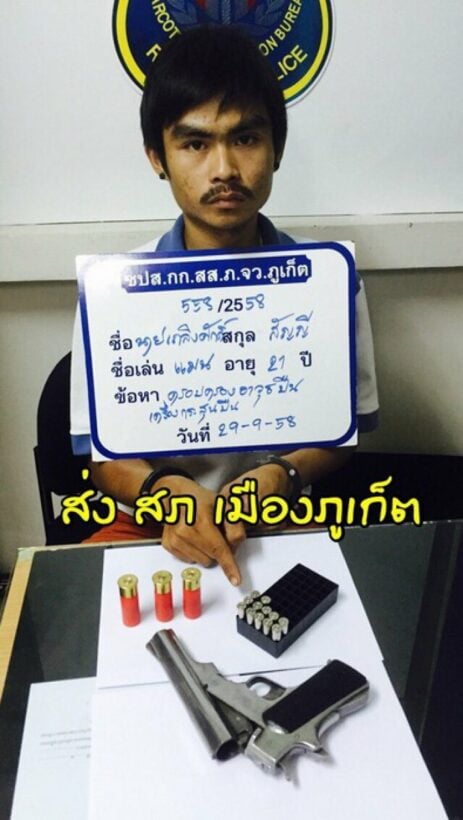 PHUKET: Police nabbed two men for the possession of illegal firearms in separate arrests this week, one was carrying a homemade gun, while the other had purchased his through Facebook.

Police arrested one of the suspects, a 16-year-old, at the Sengho bookstore in Phuket Town, confirmed Maj Ritthichai Choomchuy of the Phuket Provincial Police.

The teen confessed that he had made the weapon himself, a growing trend among teens in Phuket that is bolstered by easy access to gunsmithing tutorials online.

Anuphong Phuangjan, an 18-year-old from northeastern Thailand who was arrested after shooting himself in the leg with a homemade gun in April, recently explained to the Phuket Gazette that Thai-language resources were readily available when he decided to make his weapon.

“It was very easy to learn how to make a gun. You just Google it, and everything you need is there,” Mr Anuphong said.

“The equipment is also easy to find. The barrel of the gun is just a piece of the right kind of metal tubing, while the rest is easy to find too. If you want to get creative, you can build the stock or handle from wood.”

The recently arrested 16-year-old, however, did not reveal to police how he made the weapon or how he managed to obtain five rounds of ammunition for it.

“Our source reported that Mr Thalerngsak had taken the firearm with him to the main SuperCheap on Thepkrasattri Road,” Lt Col Sommai Onkham of the Phuket Provincial Police said.

“Inside the vehicle that matched the description we were given, we found one firearm and three rounds of ammunition.”

Mr Thalerngsak confessed to police that he had bought the weapon and ammunition via Facebook about two weeks ago (Special Report on social media gun dealing here).

“A decade ago, people would need the know-how or a special connection to get their hands on a firearm. But now, with Google and YouTube, as well as social media, such as Facebook, almost anyone can obtain a gun,” Superintendent Kraithong Chanthongbai told the Gazette last month. “We are seizing twice as many guns a month than we did previously. Last year, we confiscated three guns a month on average. This year, it’s six.”

An additional 12 rounds of ammunition were found at Mr Thalerngsak’s house.

“The ammunition found at his home were what was left from a box of 50 that he had purchased at a firing range in Sakoo, Thalang,” Col Sommai said. “The gun is a registered firearm, so we are currently tracking down who is legally responsible for it.”

Both suspects were charged for illegal possession of a firearm in public.

Underpass construction digs in with delays