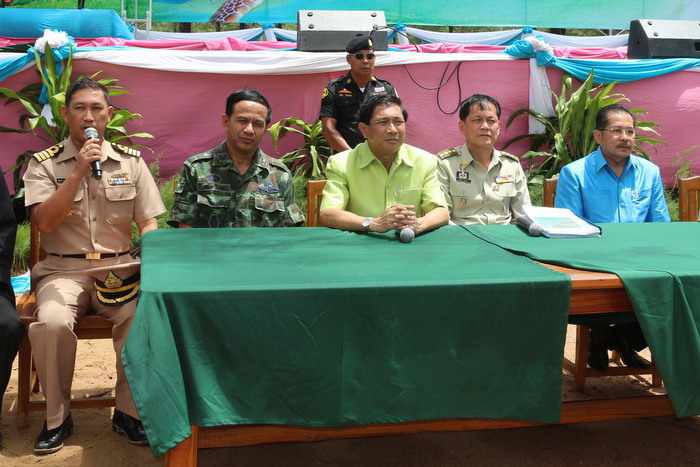 PHUKET: More than 700 rai of public land inside Sirinath National Park could be returned to the public by September 16 if a dozen land documents under investigation by the Land Department are found to have been illegally issued.

“I am quite confident that most of the [12] documents [under investigation] were illegally issued. We are just waiting for officers from the Land Department to finish their investigation,” Director-General Niphon Chotiban of the Department of National Parks, Wildlife and Plant Conservation (DNP) said yesterday after an inspection of the park area at Sai Kaew Beach in Mai Khao.

“I am also confident that none of the Land Department officers would risk their livelihoods by approving illegal land documents.

“If all of the 12 plots [under investigation] are found to be illegal, we will be able to reclaim at least 700 rai of public land.”

Land Department Deputy Director-General Thammasak Chana assured that the Land Department is taking the investigation “very seriously”, and that it would be complete by September 16.

“We are working hard to determine the land ownership. We are also in the process of confirming all documents from applicants who attempted to upgrade their land deeds from a SorKor 1 to a Chanote title,” he said.

“We will reclaim only land that belongs to the public. If the land is legally owned, we will not seize it. This investigation must be fair for everyone involved.”

Governor Maitri Inthusut, who was also present at the inspection yesterday, said that he was pleased about the teamwork between the two departments.

“This mission has been operating well due to cooperation between the DNP and the Land Department. Sirinath park chiefs can point out areas they believe need to be investigated, and Land Department officers will check it out for them,” Governor Maitri said.

About 100 rai has already been returned to the public willingly by landowners, added Mr Niphon.

“We would like to thank the 10 local people who cooperated with us and gave back the land,” he said.

“We have presented awards to them for their good deed. They will not face charges.”

After the press conference, officials and locals, including students from Baan Tah Chat Chai School, planted 3,000 casuarina, pandanus and barringtonia seedlings and released 15 turtles in honor of HM Queen Sirikit and to mark that public land at Sai Kaew Beach was being returned to the public.

Champion Nadal out of U.S. Open with wrist injury