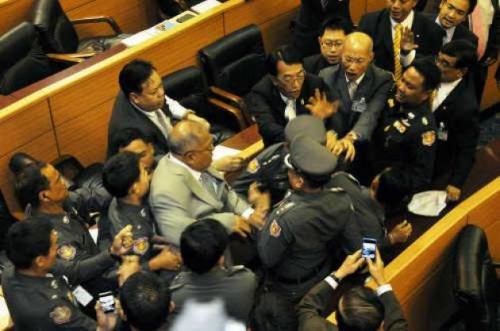 PHUKET: Parliament President Somsak Kiatsuranont, whose nickname is “Gavel Master”, lived up to his name and used his gavel vigorously for the first time yesterday during the House-Senate joint meeting deliberating constitutional amendments. However, his gaveling failed to bring order to the chamber.

Instead, they were followed by boos and MPs standing in protest. Somsak ordered the Parliament police to remove any lawmakers who refused to sit down. Several officers surrounded his chair for security. “Anyone failing to move [the standing parliamentarians] out must face a probe,” he warned the officers. This was followed by pushing, shoving and tugging between Democrat MPs and Parliament police.

MP Kulladej Puapattanakul pushed the police and put his hand on an officer’s neck. Other officers scrambled to lock his arms while MP Thani Thueksuban tried to help him. A female MP screamed.

Somsak called a 10-minute break which lasted more than half an hour.

Before the chaos, the lawmakers were to deliberate on a charter amendment related to the election, qualification and authority of senators.

Pheu Thai MP Samart Kaew-meechai, chairman of the vetting committee, told the meeting that 202 parliamentarians had registered to speak at the plenary. Two had withdrawn while some had submitted their motions after the deadline. Meanwhile, 57 motions were deemed by his committee as against the principle of the bill approved in the first reading. He asked the meeting to consider whether the sponsors of the motions should be allowed to deliberate in the plenary.

The Democrats claimed that all had the right to speak.

Democrat MP Nipit Intarasombat said he calculated the days differently from the committee, referring to the controversial closing of the meeting in the first reading.

To cut short the debate, which did not go anywhere in the morning, Somsak, who had taken the chairmanship in the afternoon, said he would allow only two representatives from the government and opposition MPs and senators to speak before voting. Following protests from the floor, he called for voting. The meeting voted 339:15 against the 57 speaking.

Opposition whip chief Jurin Laksanawisit said the House speaker might have violated the law as he had scheduled a second reading before the first reading was completed.

Jurin was referring to the meeting on the night of April 3 (early morning April 4) which lacked a quorum. It had agreed on a period for submitting motions of deliberation and the speaker assumed the motions must be submitted within 15 days.

Somsak called another House-Senate joint meeting on April 18 to complete the procedure, and the parliamentarians voted for the 15-day deadline schedule.

Jurin said MPs who lost the opportunity to speak had the right to petition the Constitutional Court. They included Democrat chief adviser Chuan Leekpai, Nipit and Jurin.

In the morning, Democrats and some senators opposed Senate Speaker Nikom Wairatpanij from chairing the meeting, saying he might have a conflict of interest.

PHUKET: A Canadian was arrested in Prachin Buri yesterday morning over his alleged role in an international penny stock fraud scheme worth more than Bt4.2 billion.

Police identified the suspect as Gregory Joseph Curry, 67. The scam’s perpetrators reportedly received more than US$140 million (about Bt4.2 billion) from victims in as many as 35 countries. Of nine suspects targeted by US authorities in connection with this scam, two managed to flee to Thailand, both of whom have now been arrested.

“The other one, Sandy Winick, was nabbed earlier by Special Branch police,” he said.

PHUKET: The unrest in Thailand’s deep South has taken the lives of 162 teachers during the past decade. Fresh attacks seen aimed at pressing the government to meet BRN demands

This month, one teacher has been killed and four wounded in bloody attacks in the southernmost provinces. In the most recent of these attacks, Atikom Tiwong was killed while travelling from his school to his home in Pattani’s Yarang district on Monday evening.

“The deadly attack has seriously affected the morale of local teachers,” the chairman of the Federation of Teachers in Three Southern Border Provinces, Boonsom Thongsriprai, said yesterday.

He said the incident also reflected the many problems in the southernmost region and the need to provide better protection to teachers.

Police said gunmen on a moving pickup opened fire on Atikom – a teacher at the Ban Prachan School – while he was riding his motorcycle back to his home. Before the gunmen fled the scene, they spread leaflets announcing the attack was carried out in retaliation against state officials. In the wake of the attack, the Ban Prachan School has suspended classes to mourn Atikom’s death and to give some time for his colleagues and students to recover from the shock.

Some 11 nearby schools have also closed down temporarily, as their teachers plan to attend Atikom’s funeral and meetings with the Federation of Teachers in Three Southern Border Provinces. Civil Society Council of Southernmost Thailand chairman Prasit Meksuwan believed the violence in the deep South had intensified lately because some insurgents were trying to pressure the Thai authorities to accept the five demands made by the BRN (Barisan Revolusi Nasional).