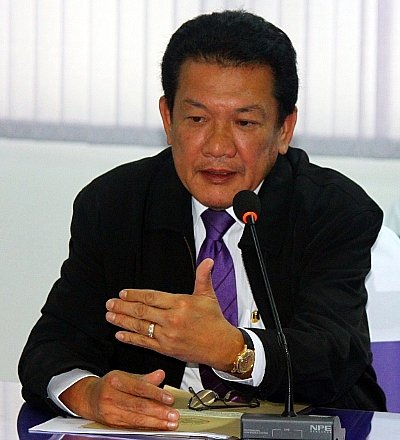 Wanta Phummararossukon, who holds the position of “Special Scholar” at the PLTO, explained that his office is currently open to receive applications to run concessions on three bus routes as follows:

Two other routes are currently under consideration:

“Route 1 is already in service, but routes 2 and 3 cannot be because whenever someone tries, the taxi and tuk-tuk [people] ‘do something against us’.

“Another issue is illegal taxis. We are planning resolve the black-plate taxi problem by having them brought into the system and registered, perhaps enticed by being included in a single-number call center for all taxis.

“We will have each authority be strict in their duty and arrest those not abiding by the law,” Mr Wanta added.

Patong Deputy Mayor Chairat Sukkaban said he had heard that some companies were interested and ready to run bus services on routes 2 and 3, but they were afraid of “the influence”.

To counter the fear, he called on unity among relevant authorities to make sure operators were protected.

“The Land Transport Office, Phuket police and local administration organizations must act together. They must be strict in asserting their authority; they must enforce the law as they are empowered and obligated to do; and they must make sure there is nothing hidden in the law enforcement,” Mr Chairat said.

“To have the routes in service, it is our responsibility to ensure the concession companies do not have to face ‘the influence’ all alone,” he added.

Phuket Land Transport Office (PLTO) chief Teerayout Prasertphol agreed in part, but asked the big question: who was going to stand up to those who currently rule Phuket’s public transportation system.

“The most important thing is who is going to take care of this problem? I suggest local authorities as an option,” Mr Teerayout said.

To this, Phuket Tourist Association Vice President Sarayuth Mallam said, “The Land Transportation Office does not need to ‘transfer’ this responsibility to anyone else – this is your responsibility.

“Taxi and tuk-tuk drivers fear no one, except for you – because you issue the license plates that allow their cars on the road. Sorting this problem out is your responsibility.”

Mr Sarayuth added that one of the major obstacles was that some persons in positions of authority had relations – literally – with the people involved.

“Some of them are their relatives or friends,” he said.

“Another problem is that metered taxis can’t even drive around the island because of taxi and tuk-tuk drivers. I would like to ask the authorities to have public transportation able to drive anywhere on the island,” he said.

“By the way, it does not matter what great plans we have when the authorities do not fulfill their duties. Illegal taxis must be brought into the system. You can probably give them a period of time – like 30 days – to register. After that, get strict on them,” he said.

Vice Governor Weerawat added, “This is all about law enforcement. All of this can be done by the authorities…

“What about we work on these problems and have the next meeting in another two weeks to see what progress has been made?”