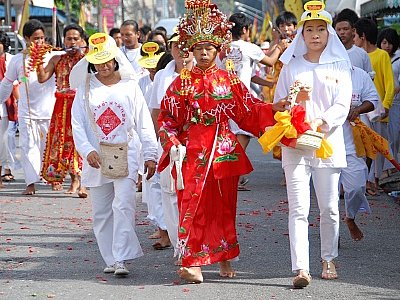 PHUKET: Day three of the annual Phuket Vegetarian Festival today was highlighted by a loud and colorful procession through the streets of Phuket Town by members of the Sapam Shrine in Koh Kaew.

Adherents, including many mah song spirit mediums, were up early to prepare for the walk, which took place under relatively dry conditions, given the recent rainfall on the island.

After the mah song handlers prepared their charges by donning surgical gloves and piercing their cheeks and faces with a wide variety of sharp instruments, devotees piled into various types conveyances for a motorcade to Satree Phuket School, where the walk through the streets began.

Among those taking part was Phuket Provincial Administration Organization (OrBorJor) President Paiboon Upatising, who rode in an ice-cream vending salaeng (motorbike with sidecar), handing out free ice-cream cones along the way.

Among the stranger sights were a mah song with the shaft of a large ceiling fan through his cheeks, and another with the business end of an assault rifle rammed through a cheek.

Perhaps the most unique was a mah song with small lengths of yarn stitched into his jaw and outer arms in an attempt to look like a bearded bird.

One of the mah songs reportedly had to be taken to hospital after losing too much blood as a result of the piercing.

Bangonrat Chinaprayoon, director of the regional Tourism Authority of Thailand office in Phuket Town, said the annual spectacle has this year attracted a large number of Chinese tourists.

Hotel occupancy rates along procession routes in Phuket Town are fully booked from October 1 to 5, which corresponds to a long holiday in mainland China.

Ethnic Chinese from Singapore and Malaysia are also driving up occupancy rates during the festival, with advance bookings pointing to as much as 80 per cent in beach resort areas.

Tomorrow, day four of the festival, will feature the Samkong Shrine street procession. A good place to view the event is along the main street through Phuket Villa 1, where almost every home sets up an altar to make offerings and receive blessings.

Those hoping to receive blessings from the Warrior Gods as they pass in their temporary incarnate form may want to bring an umbrella, however.

The forecast by the Southern Meteorological Center at Phuket Airport calls for scattered thundershowers covering 60 per cent of Phuket over the next 24 hours.