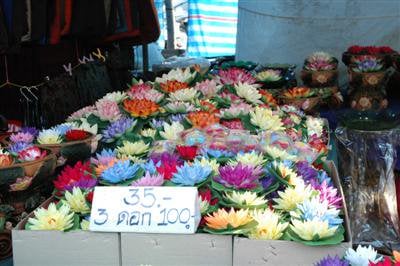 PHUKET CITY: The 4th annual Phuket One Tambon One Product (OTOP) Fair began yesterday, with 200 booths set up around the main stage area at Saphan Hin in Phuket City.

Tonight will be the official opening ceremony, featuring a performance by the Superdance team from Samkong.

The event, which begins in the late afternoon and runs until about 11 pm daily, will continue until February 12.

Of the 200 booths, about 50 will showcase products made in Phuket. Products from every region of Thailand will be on display.

There will be demonstrations, exhibitions, entertainment and a wide variety of food available every night throughout the fair.

Organizers expect the event to draw about 1,000 visitors daily and result in total sales of 8 million baht.

Somsak Songnui, chief of the Phuket Provincial Community Development Office (CDO), said that of the province’s total OTOP budget of 1.5 million baht, 863,000 would be spent on organizing the Phuket OTOP festival.

The remainder is earmarked for an OTOP “roadshow” to a large OTOP fair to take place in Ubon Ratchathani February 25 to April 2.