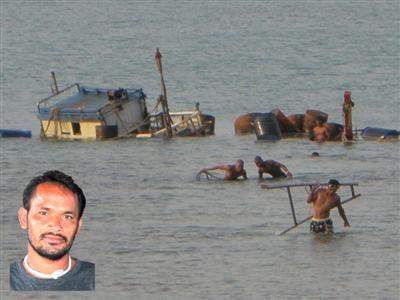 RAWAI: It took a week of strenuous effort, but the fishing boat Sa-nguansin, which sank off the coast of Racha Yai island on the evening of January 25, was finally raised and towed ashore to Cape Panwa on February 2.

All 14 members of the crew survived the accident unharmed, though boat owner Sanor Phopipat now faces a bill for half a million baht’s worth of repairs.

Villagers and fishermen on Racha Yai must have felt their luck was in when whole tuna fish started washing up on the island’s beaches on January 27 – the boat was carrying over 5,000 tonnes of fish when it went down in heavy seas at around 9 pm.

The crew were rescued by the fishing boat Chokenattaporn, which was in the area at the time.

Mr Sanor, who estimated the cost of the damage at around 480,000 baht, said he was worried about how he would take care of his family now his livelihood had been destroyed.

On January 27, tuna from the Sa-nguansin‘s hold began to wash up on the beaches of Racha Yai. Villagers were initially delighted that fresh tuna were washing up on their beach, but exposure to the sun meant they quickly began to decay and smell. They eventually began to burn and bury the inedible fish, which were bothering tourists.

Meanwhile, Mr Sanor and his crew were trying to salvage the Sa-nguansin. After an initial inspection of the site on January 26, the men returned the next day on a friend’s fishing boat to try and raise the vessel, lying 30 meters below the surface.

The men tied empty oil drums to the boat and pumped them full of air in an unsuccessful three-day bid to float the vessel.

On January 30 they came back with a team of navy seal divers from the Royal Thai Navy Third Fleet, based at Cape Panwa. Again the effort failed for lack of proper equipment.

On January 31, divers attached more than 30 oil drums to the vessel and were finally able to lift it off the seabed, though not all the way to the surface. Using navy patrol boat Tor 220, they attempted to tow Sa-nguansin, but the rope broke and the attempt had to be abandoned as night set in.

On February 1 the Royal Thai Navy brought in warship Ruea Luang Tongkaew to assist and the vessel was finally towed to within a mile of the navy base before the tow rope snapped once again.

On the final day of the saga, the vessel was finally berthed at Cape Panwa at around 4 pm.

Mr Sanor has already set to work repairing his boat.