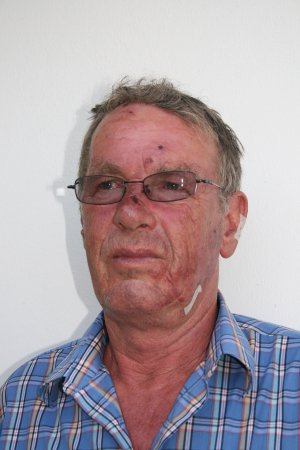 KATA, PHUKET: A 69-year-old Norwegian tourist sustained a fractured nose and other facial injuries after he was reportedly attacked while enjoying his morning coffee in Phuket on March 12.

Kristian Kristiansen claims he was sitting on the porch of his ground floor room at Moon Shine Apartments in Kata when he was approached by a leather-clad Thai man with long hair.

Retired fisherman Mr Kristiansen, who is six feet four inches tall, said the Thai man asked him if he was having a good morning.

“I replied ‘yes, fine thank you’,” Mr Kristiansen said. “Then he punched me in the face.”

After reportedly being punched four times, Mr Kristian said he grabbed his attacker by the scrotum (testicle bag) and yanked hard.

“The man cried out in pain and ran away,” he said.

At the time of writing, Chalong Police were searching for the alleged attacker, who is thought to be a musician who works at a nearby live music venue.

Mr Kristiansen thinks he was attacked for complaining about the noise from the venue.