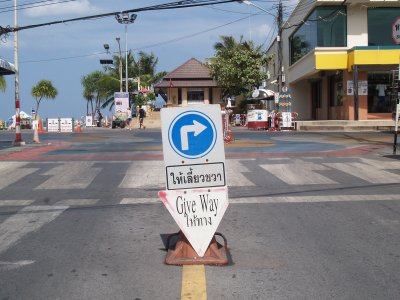 PATONG, PHUKET: There could be a turnaround in Patong’s traffic woes by the year’s end. Mayor Pian Keesin has announced plans to redirect the one-way system in Phuket’s tourist epicenter from clockwise to anticlockwise.

Newly appointed Kathu Police Superintendent Arayapan Pukbuakao said earlier this month that the current system, which came into effect in 2007, “not only confuses people but is in violation of current Thai traffic laws.”

Traffic flows southbound on Rat-U-Thit 200 Pi Road and northbound along the beach road. Under the new system, this would be reversed.

It is not yet clear how traffic flow will change on connecting roads between Rat-U-Thit 200 Pi Road and the beach road, such as Sawatdirak, Bangla and Ruamjai.

At present, motorists drive on the right-hand side on those roads and not the left-hand lane as is standard in Thailand.

“The road will be developed as a new business route in the near future and will also become part of the solution to Patong’s traffic problems,” he said.

“This will allow for more public parking space on the beach road for tourists and local residents,” he said.

Mayor Pian said a meeting with Phuket Land Transport Office, to be held “soon”, would be the next step in moving Patong’s transport plans forward.