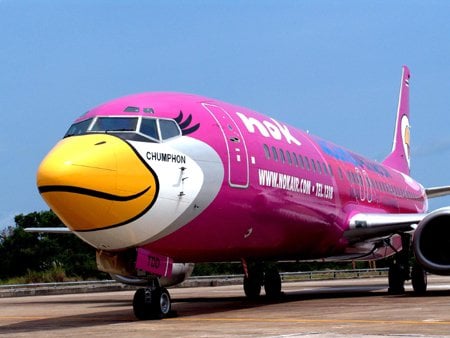 The Phuket Gazette’s report as well as other media reports were used by the board in their decision making, Nok Air media and public relations representative Dechavut Vuttisilp told the Gazette.

The limited service, which resumes on August 9, is scheduled to operate on Saturdays and Sundays only. Flights depart from Don Muang airport in Bangkok to Phuket International Airport (PIA) at 9.15 am, with the return leg taking off from PIA at 11.05 am.

However, the Sunday flight for this week will be moved to Tuesday, August 12 to accommodate those wishing to enjoy Mother’s Day in Phuket. For the rest of August the flights will be on Saturdays and Sundays.

Many Phuket-bound tourists  who already faced limited flight options following the suspension of One-Two-Go’s services on July 22  were stranded in Bangkok when Nok Air suspended its Bangkok-Phuket service on August 1. The move followed Nok Air’s halt of its Krabi-Bangkok service on July 1.

At that time, Nok Air issued no official statement regarding its marketing strategies, but a source at the budget airline told the Gazette that people would be able to figure it out if they looked carefully at what the airline was doing.

Nok Air also suspended its loss-ridden Phuket-Haad Yai service November last year after a six-month trial period found there were not enough passengers to continue it. It now remains impossible to fly between the South’s two major airports, which for decades had regularly-scheduled services.

Angry Finnish tourist Arto Tiitinen called from Suvarnabhumi Airport in Bangkok on August 2 to inform the Gazette that many other irate Phuket-bound tourists were awaiting standby flights.

“I’m surprised that there are not extra flights; now my family must holiday elsewhere. I have no problem with money, it’s just that there aren’t any tickets to Phuket available for now at any price,” he said, adding that he would instead take his family to Chiang Mai for a holiday.

As it celebrates its 4th anniversary, the carrier has also relaunched its “Nok Gives Life” project.