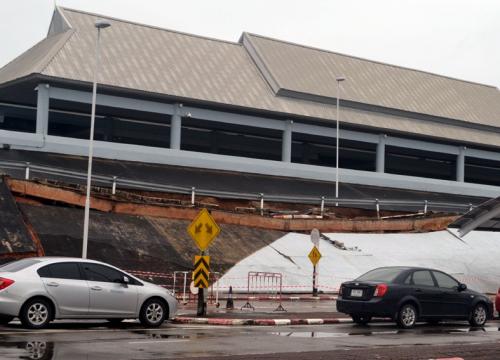 PHUKET: Department of Civil Aviation (DCA) officers confirmed that there was no structural damage to the domestic terminal at Krabi International Airport after heavy rains caused the ramp road of the terminal to subside (story here).

The DCA has already approved a budget to make repairs to the airport, which recently underwent a 743-million-baht upgrade.

The budget is set to fund repairs to both the road and a retaining wall which collapsed after heavy rains over the past week washed away the earth beneath it.

“Customer safety is guaranteed. And the DCA has approved a budget for making the necessary repairs, and has contacted a contractor to fix the road and the retaining wall,” Airport Director Sunyaluk Kraiboot told the Phuket Gazette. “We expect the contractor will make the repairs next week.”

During the inspection of the site, officers found that 30 centimeters of the retaining wall’s concrete beams along the road to the domestic terminal were broken or weakened, Mr Sunyaluk said.

“We also found that a 10-meter-stretch of road had sunk and suffered damage to varying degrees,” Mr Sunyaluk said.