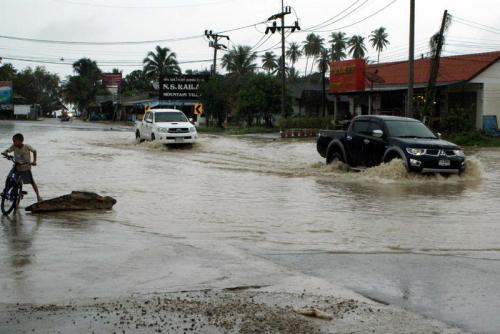 PHUKET: Despite heavy rains flooding parts of Ao Nang and Krabi Town yesterday, officers at the Southern Meteorological Center (MET) in Phuket say today that there is no need to fear floods or landslides in Phuket just yet.

Deluges in Krabi, across Phang Nga Bay from Phuket, damaged an estimated 20 houses and caused minor flooding up to 60 centimeters deep.

The worst affected area was on the main road between Krabi Town and the fossil seashell museum in Ao Nang.

However, an officer at the Phuket MET office this morning told the Phuket Gazette that flood warning deluges are not expected to hit the island for the duration of this month.

“Although Phuket tends to have heavier rainfall in the [southwest] monsoon season; for now we are still safe from floods and landslides.

“Wave heights will be about one meter, possibly higher than two meters in storm-condition areas. Shipping should proceed with caution,” the officer added.

Thalerngsak Phuyannapong, chief of the Department of Disaster Prevention and Mitigation Krabi office, told the Gazette that the areas that flooded across the bay yesterday afternoon were prone to flooding.

“In Moo 5, along the border of Ao Nang and Sai Thai subdistricts, there are always problems with flooding during heavy rainfall since the drains there do not work well. I have reported the problem to the Highways Office regional headquarters in Phuket, but we have yet to see any improvements made,” Mr Thalerngsak said.

“Floodwater in that area usually dissipates within about an hour after the rain stops,” he added.

Rain in Krabi this morning has stopped, as it has in Phuket, and the floodwater has receded.

“The situation is back to normal,” Mr Thalerngsak confirmed.