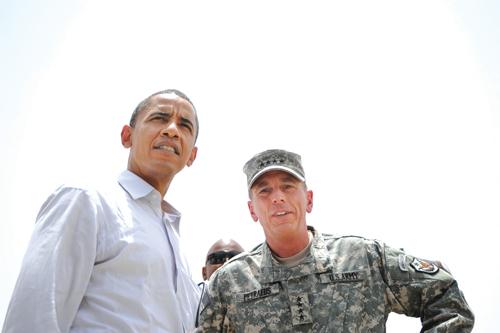 PHUKET: General David Petraeus is justly famous for introducing a sophisticated counter-insurgency strategy in Iraq that averted a catastrophic civil war and led to an orderly American withdrawal.

Previously, American troops had been stationed in huge forts from which they would venture forth in under-armored vehicles, which fell prey again and again to roadside bombs. Petraeus introduced a badly needed surge of troops, stationed them among the local populace, bought off Sunni tribes that had become disaffected by the excesses of Al-Qaeda, and introduced vital community services that flourished in a new atmosphere of security.

Moving on to a one-year assignment in Afghanistan, Petraeus became the leading exemplar of a new wave of generals, highly educated, creative and focused on protecting civilian populations from fanatical insurgents.

Paula Broadwell’s hagiography of the general All In: The Education of General David Petraeus (Penguin Books, New York, 2012, 394pp) began as a PhD thesis. Like Petraeus, Broadwell graduated from West Point, specialized in counter-insurgency theory and excelled as a physical fitness devotee.

Their relationship was cemented by their first six mile run together. She was encouraged by her publisher to “go big” with her book: turning it into a best seller with the help of her co-author Vernon Loeb, a Washington Post editor who had been embedded with Petraeus’ 101st Airborne division during the 2003 invasion of Iraq.

The result is a non-academic tome that still manages to be boring: leaden, repetitious and replete with military boilerplate. There are huge chunks of in-house hyperventilated praise for the ambitious soldier, long-winded congressional testimony and complex theoretical screeds.

The structure of the narrative does make a stab at liveliness. The book opens with Petraeus taking over the Afghan command from his talented and driven protegee Stanley McChrystal in the wake of a Rolling Stone profile that revealed McChystal’s contempt for the Obama administration.

The story then moves backwards and forwards through the events of Petraeus’ career. Son of a Dutch merchant marine captain, Petraeus grew up in a small town near West Point and excelled at the academy, graduating in the top five per cent of his class and marrying the daughter of the school’s superintendent.

Later, he would receive a PhD from Princeton for his thesis on counter-insurgency operations in Vietnam. He served as aide-de-camp for a trio of military mentors, rising rapidly through the ranks until his first combat command of the 101st “Screaming Eagles”, where he distinguished himself in rapidly rehabilitating the Kurdish capital of Mosul. He generously mentored junior officers and journalists alike. Broadwell alludes to envious comments about Petraeus as a “self-promoter”, but offers no specific negative quotes from any sources.

Petraeus was next tasked in 2004 to train and equip the Iraqi military and police forces from scratch, a monumental task which he compared to “building the world’s largest aircraft, while in flight, while it’s being designed, and while it’s being shot at”.

So successful was he at this task that President George W Bush eventually appointed him to overall command in Iraq. At a meeting in the White House, Bush described the “surge” as a “double down strategy”. Petraeus replied: “This isn’t double down, Mr President. It’s all in.”

Despite skeptics, the strategy succeeded and led to President Obama appointing him to the next big challenge of Afghanistan. Broadwell spent a year in Afghanistan and enjoyed unparalleled access, following closely the anti-Taliban campaigns of three of the general’s top subordinates. Her descriptions of individual firefights and overall strategy are superb.

The book ends with Petraeus taking the oath as CIA Director in 2011. Ironically, he lasted only a year in the job, forced to resign when emails came to light that revealed an extramarital affair with none other than Paula Broadwell.

Nonetheless, Petraeus has forever changed the thinking of the American military. Broadwell may be biased, but it’s difficult to dispute her assertion: “Far beyond his influence on the institutions and commands in Iraq and Afghanistan, Petraeus left an indelible mark on the next generation of military leaders as a role model of a soldier-scholar-statesman.”

Paula Broadwell’s hagiography of the general All In: The Education of General David Petraeus, is available for download for the kindle from Amazon (click here), or by order through the main bookshops in Phuket.