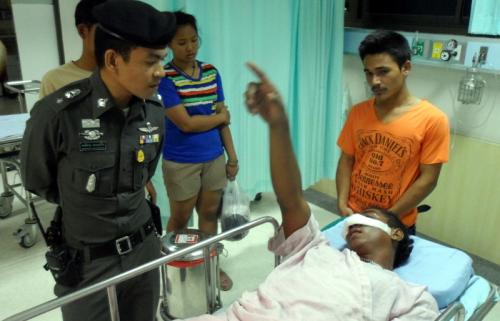 PHUKET: A man enjoying a laid-back beach party with friends at Kalim, north of Patong Beach, last night managed to push away a shotgun that was pointed at his head just before it went off.

Khatawut Sangngam, 23, was with friends on Kalim Beach (map here) when three men rode by them on motorbikes, looked them over, and rode on.

“They said ‘Who hurt my nong [younger brother/sister]?’

“Then one of them pointed a shotgun at my head. I pushed the barrel away just before it went off,” Mr Khatawut said.

“Then the man turned the gun around and used the stock to hit me in the face. When people started to gather, the men left,” he added.

Patong Police were called to the scene – in front of the Patong Lodge Hotel – at 12:30am, but did not find Mr Khatawut there, as he had been rushed to Patong Hospital by his friends.

“We found two pairs of sandals, a spent shotgun shell, and blood on the footpath in the area,” said Sub Lt Pattapee Srichay.

Police questioned Mr Khatawut at the hospital, where he was being treated for a broken nose.

“We have collected evidence and will continue questioning the witnesses. We suspect there is a dispute between the two groups,” Lt Pattapee said.

Reaching out for that helping hand

No fear of floods or landslides yet, says Phuket MET