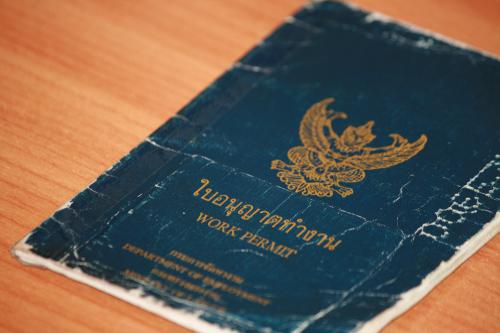 PHUKET: While illegal taxi, tuk-tuk and tour van drivers continue to work freely in Phuket under a government pledge of immunity from arrest, foreigners waiting for work permits will receive no such protection.

In their long-accommodating efforts to encourage drivers working in the tourism industry to become legal, the provincial government has granted amnesty to all illegal transport drivers in Phuket until December 31 (stories here and here).

However, the director of the Phuket Provincial Employment Office (PPEO), who quietly re-opened the PPEO office after having closed it for two and half days last week (story here), has confirmed to the Phuket Gazette that foreigners who have applied for work permits will receive no such privileges – regardless of whether or not the foreigners have filed all the correct paperwork with the appropriate authorities.

“We are not permitting any exceptions to allow foreigners to work while they are waiting for their work permits to be issued,” PPEO Chief Yaowapa Pibulpol told the Gazette.

“It takes time to process and verify the documents submitted in each application, and filing an application does not guarantee the applicant will be approved for a work permit,” she explained.

“Even though some drivers are allowed to work before they are fully legal, we stand by our rules. Foreigners cannot work without being issued a work permit,” Ms Yaowapa stated.

Illegal transport drivers on the island have until December 31 to comply with the law.

“From January 1, anyone found working illegally as a taxi driver will be fined 20,000 baht for each infringement,” Phuket Vice Governor Chamroen Tipayapongtada warned late last month.

Body believed to be western woman retrieved from water off Ranong, brought to Phuket