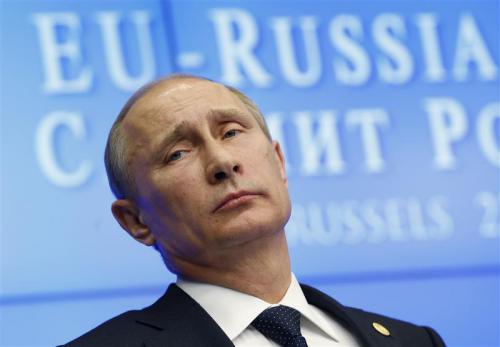 The abolition of RIA Novosti, as well as international radio station Voice of Russia, and establishment of a news agency to be called Rossiya Segodnya (Russia Today) is part of efforts to strengthen the president’s authority after protests against him.

It is also designed to improve Russia’s international standing after growing Western criticism of its record on human rights and democracy, and accusations, which it denies, of bullying neighbours such as Ukraine.

Political analyst Pavel Salin said the decision was probably a result of Kremlin turf wars and a victory for the conservatives. It sidelines liberal RIA Novosti Chief Editor Svetlana Mironyuk and promotes a TV presenter accused of making homophobic remarks on air to lead the new agency.

“I expect a sharp ideological turn now towards much more hawkish reporting under the even closer eye of the Kremlin and directed at the West,” Salin said after the move was set out of a decree signed by Putin.

A source close to the government said Mironyuk had sought a degree of independence and her removal was a political act. Maxim Shevchenko, a pro-Putin TV presenter, said on Twitter that a “nest of anti-Russian media forces” had been destroyed.

Most Russian media organisations are loyal to Putin, and opponents get little air time. The shake-up underlined the media’s importance to Putin keeping power and the Kremlin’s concern about the president’s ratings and image.

The Kremlin acted swiftly though RIA Novosti is the national host news agency and photo pool for the Sochi Winter Olympics in February. It was not clear what impact this would have on the Games. Employees said they had not expected the move.

RIA Novosti traces its roots to 1941 when the Soviet Information Bureau was formed under dictator Josef Stalin.

The head of the new agency is Dmitry Kiselyov, a pro-Kremlin television presenter know for making provocative and acerbic remarks on domestic and international affairs.

He denied being homophobic after saying on air that the organs of homosexuals should not be used in transplants and that gays should be banned from donating blood or sperm.

“Restoring a fair attitude towards Russia as an important country in the world and one with good intentions – that is the mission of the new structure that I will head,” he told the state TV broadcaster Rossiya 24.

Sergei Ivanov, the head of the presidential administration, told reporters that the changes were intended to save money, explain Russia’s politics to the world and defend its interests.

But RIA said in an English-language article: “The move is the latest in a series of shifts in Russia’s news landscape which appear to point towards a tightening of state control in the already heavily regulated media sector.”

The Kremlin had already extended its grip over radio and television broadcasting on November 26 when the media arm of state-controlled Gazprom bought mining tycoon Vladimir Potanin’s Profmedia.

Through the deal, Gazprom will add TV and radio stations to a sprawling portfolio built up around commercial channel NTV.

Rossiya Segodnya’s focus on building up Russia abroad could solidify Putin’s grip on information by further limiting sources of news for Russians whose television screens are dominated by channels controlled by, or loyal to, the state.

Putin’s decree had no direct effect on the two other major Russian news agencies, state-run Itar-Tass and private Interfax, but a government official said Itar-Tass was now likely to be the Kremlin’s main focus for domestic news.

Itar-Tass is the successor of the Soviet official Tass agency, while Interfax has more leeway as a private agency but is restricted by the Kremlin’s dominance. Heavy state funding had given RIA the clear edge over its rivals.

A prominent member of parliament, Alexei Mitrofanov, described Kiselyov as a “powerful propagandist”.

“The state is spending money (on this). It wants no subtle, balanced reverberation of interests,” he said. “If a corporation has its PR unit, it works for the corporation.”

After weathering protests led by urban liberals last year, Putin has often appealed to conservatives and championed the Russian Orthodox Church as a moral guide for society.

He has been Russia’s dominant leader since he was first elected president in 2000. He is still Russia’s most popular politician, polls show, but his ratings have dropped.


World pays homage to Mandela in mass memorial service
Reuters / Phuket Gazette
PHUKET: World leaders, from U.S. President Barack Obama to Cuba’s Raul Castro, will pay homage to Nelson Mandela at a mass memorial in South Africa on Tuesday that will recall his gift for bringing enemies together across political and racial divides.

Obama and Castro, whose countries maintain an ideological enmity lasting more than 50 years, are among the designated orators at a Johannesburg football stadium where 23 years earlier Mandela – freshly freed from apartheid jail – was hailed by cheering supporters as the hope for a new South Africa.

Coinciding with U.N.-designated Human Rights Day, the memorial service for Mandela in the 95,000-seat football City stadium is the centrepiece of a week of mourning for the globally-admired statesman, who died on Thursday aged 95.

Tens of thousands of ordinary South Africans will be joining scores of leaders from across the world to honour a leader whose life of imprisonment and political struggle made him a global symbol of integrity and forgiveness.

The fact that the visiting leaders – more than 90 are expected – include some from nations still locked in antagonism, such as Cuba and the United States, adds piquancy and resonance to the homage being held at the gigantic bowl-shaped stadium, the venue of the 2010 World Cup final.

Zimbabwean President Robert Mugabe and former British Prime Minister Tony Blair will both be there. Blair has called Mugabe a dictator who should have been removed from power. Mugabe has called Blair an imperialist and once told him to “go to hell”.

Such antagonisms will be put on mute on Tuesday as the life of someone who put his faith in reconciliation into practice to successfully unite a multi-racial nation is remembered.

“What he did in life, that’s what he’s doing in death, he’s bringing people together from all walks of life, from the different sides of opinion, political belief, religion,” Zelda la Grange, Mandela’s former personal assistant, told Reuters.

South African officials had initially said Iranian President Hassan Rouhani would also be there, raising the possibility of a first face-to-face meeting with Obama. But Rouhani’s name was not on an official list of attendees.