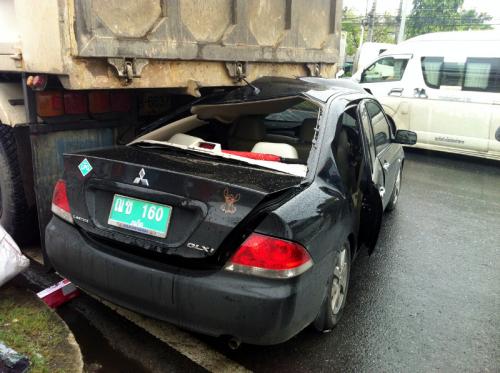 PHUKET: Three tourists from New Zealand made their flight out of Phuket today despite a concrete truck hitting their limousine and sending it careening under the bed of a parked 10-wheeled truck on Thepkrasattri Road.

“The limousine driver, Worrathat Chaikajorn, 47, had picked up the three tourists in Patong and was taking them to Phuket International Airport shortly before 11am today when they were hit from behind by a concrete mixer truck,” said Chaleaw Taihoo, Phuket City Police Duty Officer.

“The road was slippery with rain, so the impact caused the limousine to slide off the road and hit the 10-wheeled truck, which was parked outside the Koh Kaew post office waiting for a tyre to be fixed,” Maj Chaleaw said.

Because there was concern that the tourists might miss their flight to Singapore, staff from Phuket International Hospital were called to the scene to attend to them.

“One of them had a small cut from the car mirror on his left arm. The rest of them were okay,” Maj Chaleaw said.

The tourist with the small cut reportedly got it while trying to shield his wife from the impact.

“After the tourist received treatment, the limousine driver called a taxi van to take them to the airport,” Maj Chaleaw added.

The 27-year-old driver of the concrete truck, Wijit Pattani, was charged with reckless driving causing damage to a person and property.

The tourists made it to the airport in time to catch their flight.