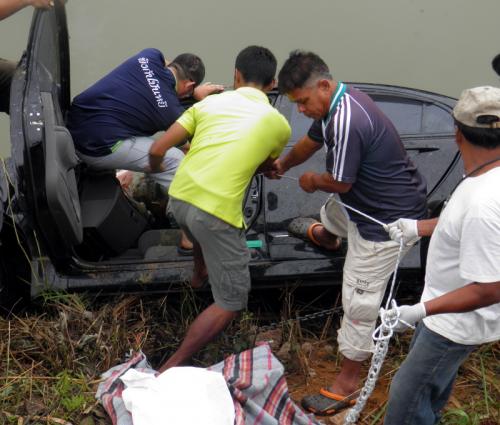 PHUKET: Three Phuket residents died and two were injured on their way to make merit for Makha Bucha Day when their car went off the road and landed in a pond in Phang Nga today.

One of the passengers, a five-year-old girl, was thrown from the car and was found dead in the pond water.

“At about 8am this morning, a Honda Civic slammed into a road safety sign warning of a dangerous curve, flipped and landed in a nearby pond,” said case investigator Sornsak Jandee of the Takua Thung Police.

“We were told that rescue workers spent about 20 minutes searching for Chawancha’s body, which was found 10 meters away from the car,” Lt Sornsak added

One of the two injured passengers was Chawancha’s mother, Laksana Nuanjui, 33. The other survivor is Sukanya Luijan, 53. Both were rushed to Phang Nga Hospital, Lt Sornsak said.

Mrs Laksana has a broken leg and Mrs Sukanya has internal injuries and is still unconscious, the Phuket Gazette was told by hospital staff late this afternoon.

“They were all relatives heading to Nakorn Sri Thammarat to make merit for Makha Bucha Day with family. The accident most likely occurred because of the wet road and the speed the car was travelling,” he said.

“Since late last year there have been about 10 deaths at this curve,” he added.