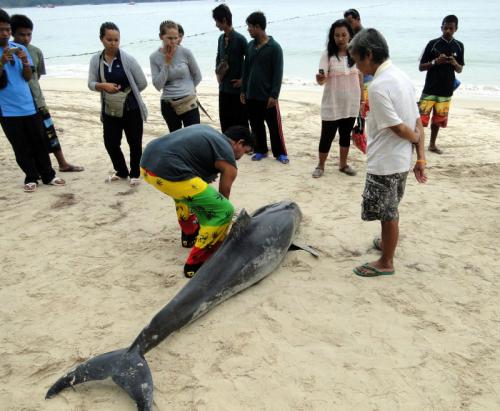 PHUKET: A bottlenose dolphin was found dead on Bang Tao Beach this morning, the first to be found beached in Phuket in years.

“They mostly live west of Maithon island in Phang Nga and in Ranong. This dolphin was about 2.2 meters long and weighed 100 kilograms. There were wounds on its beak and body, but we’re not sure if they occurred before or after death,” he said.

PMBC officers are examining the dolphin’s stomach to try to determine the cause of death.

A villager at Bang Tao saw the dolphin and reported it to the Bang Tao Longtail Boat Club president, Yunu Krohlek, who called the PMBC at about 8:30am.

“I talked to villagers who live in the area. They said that last night there were high waves. It was probably washed ashore and could not get back to the water,” Mr Yunu said.