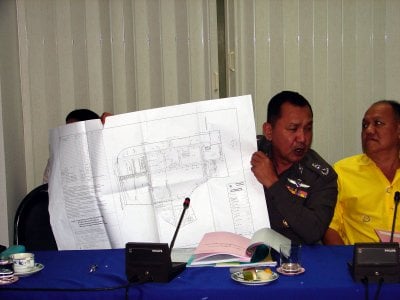 PHUKET: Plans to build a new police station in Karon are progressing at a snail’s pace, but work on the new Police Region 8 headquarters now under construction in Mai Khao is steaming ahead, officials were told this week.

Maj Gen Decha Budnampeth, Deputy Commissioner of Provincial Police Region 8, told a meeting on Tuesday that his office was still awaiting Treasury Department approval on whether the Karon Police Station project could go ahead.

Maj Gen Decha, a former Phuket Provincial Police superintendent, explained that the police station is to be built on three rai of Treasury Department land located between the Hilton Arcadia Phuket Resort and Spa and The Old Phuket Resort.

Police Region 8 had first requested to use five rai at the site, but Karon Municipality had already been granted two rai for a medical center. This left the remaining three rai to be used for a police station, he explained.

Only after the Treasury Department approves the land request can his office start construction of a road, 300 meters long and eight meters wide, to reach the proposed site from Patak Road.

The access road will cross private land, but both owners involved have agreed to donate the land needed for the project to go ahead, he added.

One of the parties granting access is a member of the Ekwahnit family, one of the island’s largest landholders.

Maj Gen Decha expects a total of 20 million baht to be spent on the new station, including land costs and construction.

Meanwhile, progress on the new Police Region 8 headquarters, now under construction on 185 rai of land in Mai Khao, is going gangbusters.

Fencing, an entrance sign, security guard box, helicopter hangar and other facilities have been completed at a cost of 10 million baht.

Work on infrastructure installation including roads, water and electrical supply, as well as a Phuket Forensic Science building, is to continue under a 90-million-baht budget.

Police Region 8 received the required budget more than a year ago, but construction stalled after encountering problems with sea gypsies living there, Maj Gen Decha said.

“There are 26 families living on the land; 24 of them have accepted compensation, but just two refused the option,” he said.

Nevertheless, construction will resume next month and take about one year to finish,” he explained.

The 13-rai forensic center will serve as a “Scientific Crime Detection Center” or “National Training Center”.

“Once it is finished, tests for drugs, including urine tests, and tests on weapons can be conducted here,” he added.

Currently, samples and other materials to be used as evidence in Phuket investigations must be sent to a forensic science center in Trang for analysis and confirmation.

Former Phuket City Police superintendent Wanchai Ekpornpit often said the lack of a testing facility on the island was a major weakness in the local criminal justice system, allowing some drug suspects to walk free.

Police Region 8 will wait until 2012 before applying for the 110 million baht in funding needed to build the headquarters office building and the officers’ accommodations, Maj Gen Decha said.