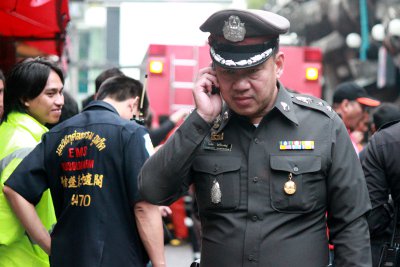 PHUKET: The operators of Tiger Discotheque have been charged with negligence causing death and physical and mental injury to others, as well as with trading after hours, Patong Police Superintendent Chiraphat Pochanaphan has confirmed to the Phuket Gazette.

The blaze that broke out at the nightclub, just before 4am on August 17, while hundreds of patrons were still inside the venue, killed four people, including two tourists.

“We have informed the suspects of the charges against them and we are now compiling our evidence to hand over to the Public Prosecutor,” he added.

Among the evidence to be submitted will be a report by expert building inspectors citing numerous breaches in fire safety regulations at the nightclub.

The disco had improper placement of fire extinguishers and faulty emergency-exit ladders, and used a highly-flammable foam for wall and ceiling decorations, said the report.

Also to be included will be a formal report compiled by forensics investigators from the Royal Thai Police indicating that the fire started inside the building.

Mr Piya and Sara Entertainment Co Ltd will be charged under Section 291 of the Thai Criminal Code, which states, “Whoever, doing the act by negligence and that act causing the other person to death, shall be imprisoned not out of ten years or fined not out of twenty thousand baht.”