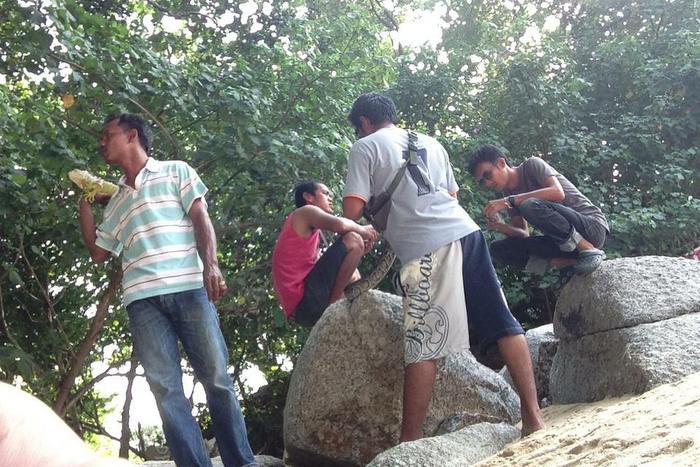 PHUKET: The newly instated Cherng Talay Police superintendent, who took up the position last week, has vowed to crack down on animal touts on Phuket’s beaches.

The promise to act follows a report from a concerned Phuket Gazette reader who spotted men on Laem Singh Beach offering tourists the opportunity to be photographed with different animals, including a snake, parrot and iguana.

“I have heard stories about touts offering photographs with animals at popular Phuket beaches before. I am well aware that many of them return to the beaches even after being arrested, since the penalty is only a fine,” Cherng Talay Police Superintendent Serm Kwannimit told the Gazette.

“I have ordered police officers to patrol Laem Singh Beach and other beaches in Cherng Talay. Anyone we find offering photo opportunities with animals will be charged for inflicting harm on the animal and causing a public nuisance.

“I won’t allow this to happen under my watch. If they keep coming back, we will keep arresting them.”

Col Serm was stationed at the Cherng Talay Police Station after a shake-up of the island’s top cops saw eight of Phuket’s 10 police superintendents transferred earlier this month (story here).