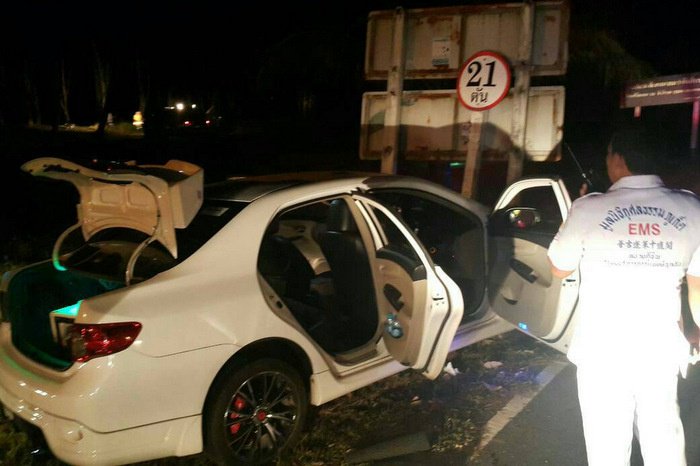 PHUKET: Police are searching for at least two men who dodged a police blockade and then threw 2,060 pills of ya bah (methamphetamine) from their car while fleeing officers in pursuit early this morning.

The suspects failed to stop at the first checkpoint, set up at at Baan Bangla in Pa Khlok, about two kilometers from the Heroines’ Monument, at about 00:30am, said Lt Col Sanit Nukong of the Thalang Police.

“They were heading toward the monument, but turned around when they saw the checkpoint,” Col Sanit said.

“The officers radioed ahead to the next checkpoint, about five kilometers down the road, where a police pickup was parked across the road to block their escape.”

Undaunted, the suspects dodged the blockade and continued at speed, but now with police in pursuit, Col Sanit explained.

“The officers found the car abandoned after it had been crashed into a roadside sign. Nobody was in the vehicle, so the officers began searching on foot,” he said.

Five pills of ya bah were found in a plastic packet on the passenger seat of the car, which still had the key in the ignition.

“We brought the car back to Thalang Police Station, where we found that it had a video camera fitted,” Col Sanit said.

“However, as the camera was fitted to film the view through the windscreen from behind the driver, we couldn’t see the suspects’ faces, but we could hear them talking.

“We could even hear them shout, ‘Throw it out!’ as they approached the second checkpoint, so we searched that area and found a bag containing more than 2,000 pills of ya bah.

“We also found a loaded handgun discarded nearby.”

Police are now tracking down the owner of the car, which was registered in Phuket, Col Sanit said.

“We hope to arrest the suspects soon,” he added.