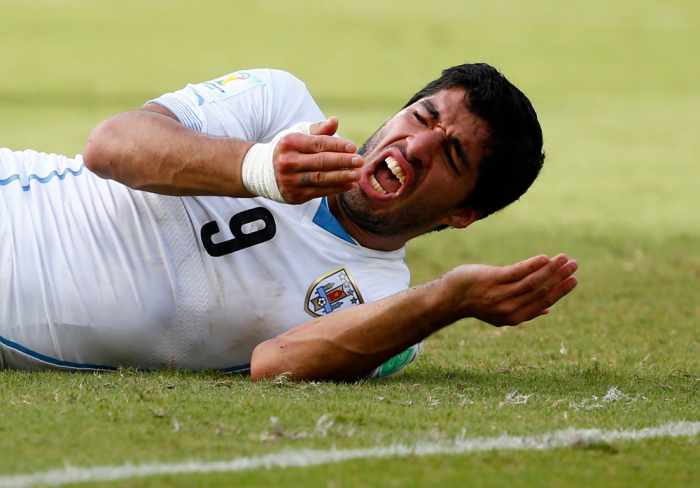 PHUKET: Luis Suarez risks losing lucrative commercial deals following his bite on a World Cup opponent, with poker brand 888 saying on Wednesday it was reviewing its sponsorship agreement with the Uruguayan.

Suarez, who plays for Liverpool in the English Premier League, became one of the online gambling company’s brand ambassadors ahead of the World Cup last month.

Suarez also has an endorsement deal with German sportswear company Adidas and one of its adverts feature a picture of Suarez baring his teeth.

Adidas said it would respond to the latest controversy involving Suarez once FIFA had investigated it.

Suarez bit Italy defender Giorgio Chiellini on the shoulder during his country’s 1-0 win on Tuesday. Twice previously banned for biting, Suarez looks likely to be hit with another lengthy suspension despite escaping punishment during the match.

Online gambling company 888 moved quickly to distance itself from the player.

“Following the allegations made against Luis Suarez in regards to his behavior during Uruguay’s World Cup match against Italy, 888poker is seriously reviewing its relationship with the player as we will not tolerate any unsporting behavior,” 888poker said in a statement on Wednesday.

The company displayed the statement prominently on its website, above earlier content praising Suarez for his “extraordinary” achievements in soccer.

Sponsors include termination clauses in contracts that they can use if an athlete brings a brand into disrepute.

Adidas, which is battling Nike for supremacy in the soccer kit market, was careful not to condemn Suarez before FIFA had decided what action to take over the bite.

“Adidas is aware of the issue involving Luis Suarez. We await FIFA’s full investigation into this matter and will respond accordingly,” the company said in a statement.

Suarez is one of the top soccer players who have been advertising the fashionable Beats brand of headphones.

Although the bite has created headaches for companies who work with Suarez, others have used the outrage to generate free publicity for their brands with instant campaigns on social media based on puns and jokes.

New Catholic church soon to be consecrated in Cherng Talay

Murray eager to extinguish Blaz in round two