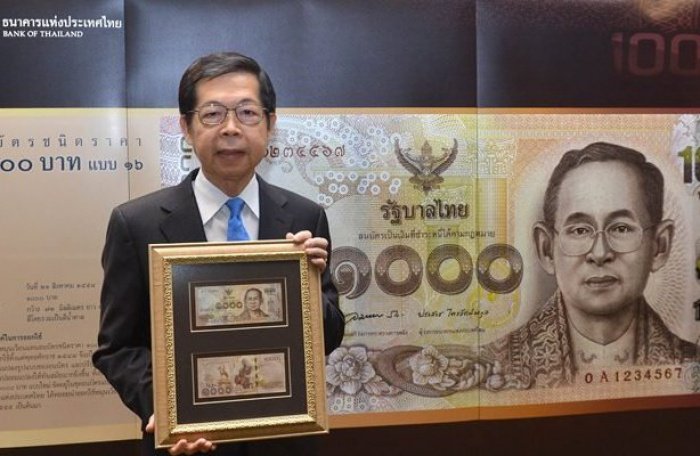 PHUKET: A new 1,000-baht banknote will be available at commercial banks in Phuket and throughout the country tomorrow, Bank of Thailand Governor Prasarn Trairatvorakul revealed on Monday.

“The 1,000 baht banknote ‘Series 16’ will enter circulation on August 21. The design is to glorify His Majesty King Chulalongkorn for his incomparable contributions to the country,” Mr Prasarn said.

The new banknote has been enhanced with security features to enable authentication by machines and by the general public, including the visually impaired. However, the color and size remain unchanged.

Highlights of the new security features are as follows:

Watermark: His Majesty the King’s portrait watermark and a translucent watermark of the Thai numeral 1,000 are clearly visible when viewing the note against light.

Color-shifting ink with latent image: The color of the Thai ornament at the bottom
left corner of the note will change from gold to green upon tilting and the latent
concealed 1,000 numeral becomes visible.

Hologram foil stripe: The reflective holographic foil on the right side of the note contains the Royal Emblem with the Arabic 1,000 numeral in the center, switching to Thai numeral when tilting the note.

Tactile marks: Seven horizontal lines leading to the four tactile marks in the shape of
flowers, representing the braille alphabet’s ‘T’, symbolizing one thousand, can
be identified by touch.

The new 1,000-baht note is exchangeable at every commercial bank across the country and both existing and previous series of notes remain legal tender, Mr Prasarn noted.